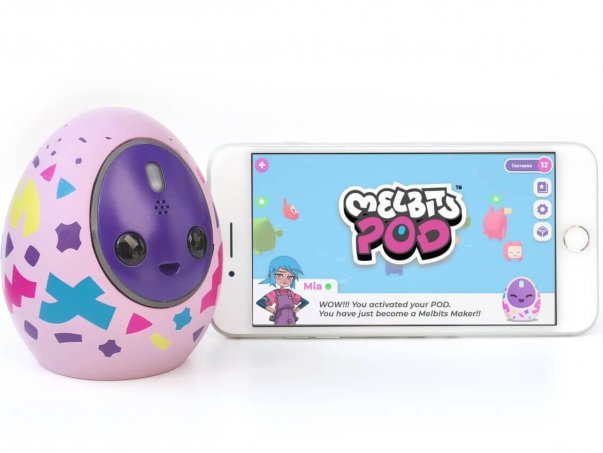 The Melbits POD is a new AR virtual pet. This augmented reality tamagotchi-style toy is a futuristic companion that you can nurture and play with.

This Melbits POD review and guide includes information on how to buy it today. Be one of the first to receive this cool virtual pet.

Click here to head directly to the product page for the Melbits POD, where you can back in Kickstarter and buy it now.

What is the Melbits POD

The Melbits POD is the tamagotchi in the future. It’s an augmented reality virtual pet that you can play with, nurture, feed, and enjoy.

Melbits are cheerful digital pixies. Their mission is to spread the good vibes across the world. You’ll need to create as many as you can to counter the evil viruses who threaten us all! You create more Melbits by playing with the app.

There are two components to the this AR virtual pet:

The egg device has physical sensors on it (temperature, light, and motion) that aid you in the gameplay of the POD. You take the egg for walks and nurture it through different challenges.

The app is your virtual controller for your pet. With it, you play minigames, help the egg hatch, and customize your pet.

The Kickstarter page explains the entire game really well. It looks like childrens and adults of all ages will enjoy figuring the toy out together.

How to Play the Melbits POD

The video below explains how the gameplay of the Melbits POD works. The nuances and number of combinations make this one of the most complex augmented reality games to hit the market so far.

How to Buy the Melbits POD

The POD originated on Kickstarter and that is currently the only way to get this augmented reality virtual pet.

Following a successful crowdfund, the toy is set to be manufactured starting in May of 2020. The first deliveries are set to go out to users in time for the Christmas season.

The starting price for the Melbits Pod is €49 and it increases depending on how late you are to back this Kickstarter. The retail price of the AR virtual pet is €99 when it is released at the end of 2020.

The Kickstarter goal needs $20,000 in funding to pass, which it will do any day. After that, the team has added a few hidden stretch goals that come with additional funding.

“Weather inside the hub” is the first stretch goal. We aren’t quite sure what this feature added yet, but more information should be released shortly.

“We’ll add vibration to the POD” is the second stretch goal.

Both stretch goal dollar amounts are to be determined still.

The Melbits POD is created by Melbot, an indie game company. The team has been refining the AR virtual pet concept for the last 3 years.

In the meantime, the team has also created Melbits World, a co-op console game for the PS4 and Nintendo Switch and a single player version for mobile.

Melbot works to blend fun and technology in a magical way, with the humble goal of offering other humans a fantastic time. Melbot has put together an incredible team of video game developers, audiovisual creators and hardware engineers focused on unleashing rich worlds, outstanding execution and big smiles.

What do you think about this augmented reality virtual pet? If you backed the Kickstarter, comment below!