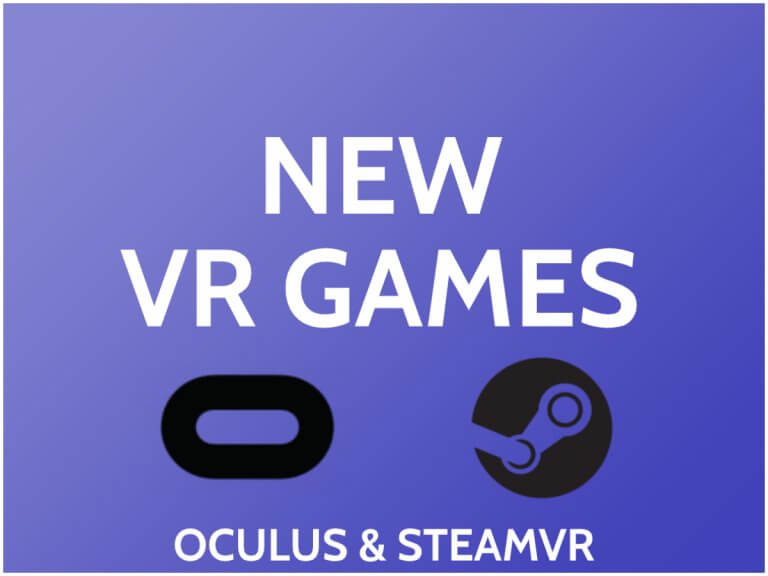 In this guide, we showcase all NEW VR games available on Oculus Home and SteamVR. This is a live updating list of new virtual reality games in 2020 that you can go buy and check out today. We also preview upcoming VR games that are coming soon for each headset.

For each game, we’ll show you:

This will let you decide what new VR games are worth purchasing today for your Oculus Rift, HTC Vive, Valve Index, HP Reverb G2, and other PCVR headsets. We’ll show both free VR games and paid VR games worth checking out.

This is a companion guide to our upcoming Oculus Quest 2 games guide, which showcases upcoming and new games for the Oculus Quest.

RELATED CONTENT: Check out some new augmented reality games worth checking out.

Below are new VR games available for the Oculus Rift S. Under the release date and description for each game, check out gameplay videos before you go and buy them today.

Operation Serpens a wave shooting game. You join an elite squad that is formed to dismantle the evil Snakes Organization. The gameplay in this SideQuest VR game is very simple – just grab the weapons and shoot the enemies.

There is no locomotion in the game so it’s very comfortable. Each level presents a new challenge and scenario in a slightly different style. This is a non stop action game and you will need to constantly duck and hide to dodge the bullets, and eliminate hundreds of hostiles in a very short time. Overall you will get a great arcade feel, hilarious moments and a lot of fun.

Dash Dash World is a kart racing game equipped with immersive full-hand driving and weapon controls. Lose yourself in hundreds of hours of gameplay. Including a fascinating story mode, exhilarating online tournaments, more than a trillion customization combinations, and hundreds of achievements for the trophy hunters out there!

All tracks and courses in the game are fun and unique. You can play the single player story mode or hop online and play online against other players.

When alien spheres from outer space invade our beloved planet, only the Buster siblings stand fast… Pangman takes you inside a VR classic arcade game experience, where your goal is to burst as many spheres as possible by using a pair of guns that transform into hooks when you throw them.

Complete 140 story mode levels in individual or cooperative campaign, and enjoy frantic multiplayer games with up to 8 players.

Cubism is a puzzle game where you have to fit colored blocks into a specified space. The game has been available on SideQuest for the last number of months, polishing its craft. Now, it is going to be available in the official Oculus store.

Immerse yourself in a zen environment as you reason your way through 60 puzzles which will put your spatial thinking skills to the test. Check out this unique new VR game and solve your way through today.

Box the Beat VR is a new VR game for the Oculus Rift S. It has randomized created levels, many music tracks and cool visualizations to the beat! More than 100 level/songs are integrated and a custom mode with various of settings as well. Fit the settings to your gameplay and upload/play every song you like. Play the campaign and the custom mode to unlock cool stuff like different locations, gloves skins and wall skins!

Each location is individually constructed and in each location are unique visualizations to the beat of the music! You can also join the chill area. Sit down, move around the different locations and chill to your music!

Hurl VR starts as a simple throwing simulation and quickly grows into an interactive puzzle game. In order to reach their goal players must throw balls to hit platforms in specific patterns. Platforms have unique properties and mechanics that change from chapter to chapter.

Space Explorers is a cinematic adventure for virtual reality. The app is free to download for the Oculus Rift and each episode costs $2.99 to purchase.

Witness firsthand the lives of veteran and novice NASA astronauts alike as they navigate the trials and sacrifices of their training and missions. Explore the dynamics and camaraderie of space programs around the world and the collaboration between the public and private space agencies, and discover the latest advancements and plans for deep space exploration.

Space Explorers will shine a light on mankind’s most ambitious journey to understand our planet, our galaxy, our universe and our origins. The series is narrated by Brie Larson.

Cook-out is a food preparation game. Set in a magical forest, you and up to three friends have to cook food for characters as they come in. Using your hands, you have to make different sandwiches and burgers per instructions on the screen.

As you progress through levels, things get faster and faster so stay alert!

If you don’t have anybody to play with, you’ll have a simulated computer character to help you out. Cook-Out is similar to food preparation games for mobile phones, but is a lot more fun in VR. It’s an upcoming Oculus Quest game definitely worth checking out.

Sky Sanctuary is an action VR game where you learn to become a samurai by fighting your way through different mini games and levels. You will follow the instructions of Delios-Sensei, your only friend out there. He will teach you how to progress in the warrior’s way and explore the secrets of Zen.

Besides training, you will explore all the islands to reveal its secrets. Find inner peace and recharge your batteries contemplating a peaceful environment where nature and technology live in harmony.

Sky Sanctuary was previously available for the HTC Vive on SteamVR.

Carnival Food Fight VR is a new VR game full of different carnival-themed mini-games. There are over 25 different levels to play, plus 3 bonus rounds, a Ferris Wheel, Carnival Horse, and Roller Coaster.

Some of the mini games included in Carnival Food Fight include food fights, serving riders, and zombies. Out of all new VR games, this one is hilarious and full of action. It has full 360 degree motion support and is available from the Oculus home store today.

Medium by Adobe is a premium graphic design and artist tool for virtual reality. You can sculpt, model, and paint your environment using only your touch controllers. This tool is for use from beginner to expert and lets you quickly created 3D objectives and works of art.

Medium also includes over 300 stamps plus snapping and constraint features. You can export your asset as an OBJ or FBX file. Your work can be used in your favorite game engine or another program for special rendering, compositing, and painting work.

Spunky Dragon is an RPG VR game where you play a master treasure hunter called upon by Wilberton. Wilbert has sent a team into a cursed dungeon and needs your help because they have not returned.

You must venture into the dungeon and avoid different traps and puzzles. Defeat magic monsters on your way using a variety of attacks and powers and progress through the store to bring the team back.

Spunky Dragon is an exclusive game for the Oculus Rift and Oculus Go platforms. It was created by Mobile Mischief.

Yupitergrad is an arcade platform VR game that takes place in space. You have to roam in zero gravity through an industrial space station. Use your surrounds to catapult and move through each level. Solve space riddles with quick thinking and concentration.

Yupitergrad has a humorous store and acrobatics in virtual reality that you won’t find in any other game. It is another exclusive VR game for Oculus Rift.

Don’t have an Oculus VR headset or don’t like buying from Oculus Home? No worries! Below, we take a look at new VR games that you can buy for SteamVR headsets.

In the section below, we take a look at SteamVR games that are available to buy and check out today. These are all new VR games to try. Due to the number of new releases that the SteamVR store has, we won’t show every new game off. We do check each new release for quality and check VR news in order to post all games worth mentioning.

Do you have a new or upcoming SteamVR game to share with the world? Contact us today and we’ll make sure it gets featured in this guide and on the website!

Cubism is a puzzle game where you have to fit colored blocks into a specified space. The game has been available on SideQuest for the last number of months, polishing its craft. Now, it is going to be available in the official Oculus store.

Immerse yourself in a zen environment as you reason your way through 60 puzzles which will put your spatial thinking skills to the test. Check out this unique new VR game and solve your way through today.

Ultimate Wall Defense Force is a tower defense VR game built from the ground up for VR. It is a chaotic action experience inspired by outrageous anime fights. Your job is to guard the wall protecting humanity by yielding powers at enemies.

With ultimate abilities in the palms of your hands, fly through the city to eliminate an onslaught of enemy Geodites and giant Geobosses, leaving destruction in your wake.

EscapeVR is an escape room VR game. You play inside a scary apartment and must find a way out before the police arrive and find you together with a dead body. But, there is evil in the darkness.

The game features unique and realistic gameplay. It is a cheap escape room choice for VR if you are curious about the genre.

Snapshot VR is a paintball game that is designed for ultimate realism and e-sports competitions. It is a multiplayer new VR game experience to play against others online.

Inspired by the real-life sport, Snapshot feels like playing paintball in the future. One shot, one kill. In competitive teams of up to 5, communication and coordination are the keys to victory.

Boom Boomerang is an action-arcade VR game. Master the skill of throwing and catching virtual boomerangs to destroy bombs before they explode.

You can unlock new boomerangs by climbing the leaderboards and collecting awards in Arcade Mode. Survival mode tests your limits to the maximum. Boom Boomerang also features global and local leaderboard.

What new VR games have you been checking out lately? Let us know down below in the comments section!

The following upcoming Oculus Rift games are set to launch in Oculus Home in the near future.

Do you know of any other new VR games for Oculus coming soon? Comment down at the bottom of this guide and let us know today!

The following upcoming SteamVR games are set to launch in the near future. If you know of any other new VR games launching soon, let us know!

Do you know of any other new VR games for Oculus coming soon? Comment down at the bottom of this guide and let us know today!

What are your favorite new and upcoming VR games that have come out for Oculus Home and SteamVR? If you’ve played anything worth checking out, comment down below!