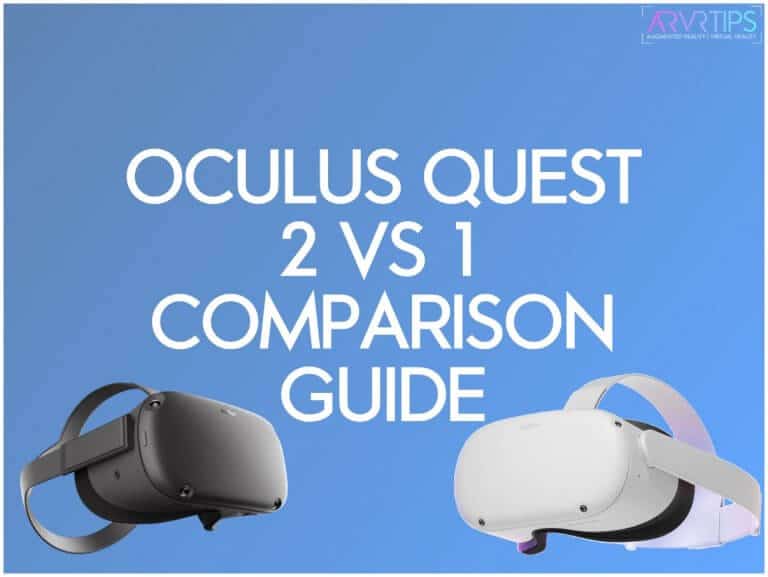 This is a comparison guide between the brand new Oculus Quest 2 and the original, released in 2019. In this guide, we’ll compare the Oculus Quest 2 vs Oculus Quest 1 in a number of different factors in order to help you decide if the upgrade is worth it or not!

The new Quest 2 was announced during the September 16th keynote speech at Facebook Connect.

On first glance, the Oculus Quest 2 offers a number of compelling updates on last year’s Quest 1. It offers a new Snapdragon XR2 processor, 2 more gigabytes of RAM, a new LCD display with more pixels packed in, and a price reduction of $100. At the same time, some early reviews and features in the new hardware are seen as a step backwards compared to the original Quest.

As these two models share many key features, including software, inside-out tracking, and hard-plastic shell, it may not be immediately obvious which model is better for you. Is it worth purchasing the upgraded model or keep the old generation for cheap? Our guide answers the question of how to device which is better for you between the Oculus Quest 2 vs Oculus Quest 1.

How to Buy the Oculus Quest 2

Click here to buy the Oculus Quest 2 from the official store.

The original Quest 1 is not available for purchase from the official store any longer. Amazon, Best Buy, and a few other retailers may still have stock until it is out.

If you’d prefer to purchase the Oculus Quest 2 on Amazon, refer to the boxes below and check out our full comparison guide underneath that!

Oculus’ breakdown shows that the two models share some of the same basic features. However, there are a ton of differences between the Oculus Quest 2 vs Oculus Quest 1 and not all changes in the new generation are positive.

Check out how these VR headsets compare to others in our comparison table. Read on for a closer look at each of these aspects, and see what exactly what the Oculus Quest 2 vs Oculus Quest 1 has to offer.

The Oculus Quest 2 contains a single panel LCD screen. It is a higher-resolution fast-switching LCD display. The resolution on the headset is 1832 x 1920 per eye. Overall, this is about 50% more pixels in the screen than the original Quest 1, which had individual 1440 x 1600 OLED panels.

In general, OLED displays offer a more accurate black color representation. This is because the screen contains individual LED lights for each pixel which can be turned on or off. LCD screens are backlit all the time, causing black colors to appear more like a grey. The cost of LCD screens is less however, which contributes to the lower cost in the new Oculus Quest. As well, the colors will be more rich and overall better in the new Oculus Quest 2 vs the original headset.

The refresh rate on the Oculus Quest 2 is 90 Hz verses a maximum of 72 Hz on the original. This is a really good improvement and should eliminate any flicker that your eyes start to notice after prolonged usage of the device. Quest game developers must release an upgrade to support the new maximum 90 Hz refresh rate, so make sure that the game you play is updated to support the increased rate.

A number of users have posted comparison screenshots between the graphics on the Oculus Quest 2 vs Quest 1. This gives a better idea of what to expect for improvements on the new headset. The increased level of detail comes from two things:

Check out these graphics comparisons below.

In the first picture, notice the realistic textures added to fish in Real VR Fishing. Notice how the water is more detailed well.

In this screenshot from VRChat, notice how much more detailed your avatar is. Look at the extra detail on the suit jack and tie.

In this screenshot from Red Matter, notice the extra details in the background and on the building on the left.

The Oculus Quest 2 contains a Qualcomm Snapdragon XR2 CPU, which is an upgrade over the 835 system on a chip (SoC) on the Quest 1. Where the Snapdragon 835 was released in 2017, the new XR2 is brand new for 2020. Oculus worked directly with Qualcomm to optimize the processor for the new headset.

Promo material indicates that the XR2 offers twice the performance and six times the video pixel throughput verses the 835. These features should allow the display to come through crisp and clear. The biggest improvement is in artificial intelligence (AI) processing, which is 11 times faster on the new XR2. This should allow games to include more complex materials, better lighting and be more ambitious than on the original headset.

Comparing the Quest 2 vs 1, there is enough power in the new headset to include physically based rendering (PBR) models which allow for higher quality shadows and reflective materials.

Click here to read our in-depth review on the Snapdragon XR2 processor compared to the 835! We will go into extensive detail on the new and old processor to compare the stats on each.

The inter-pupillary distance (IPD) is the distance between the center of your two eyes. The world average is 63 millimeters, but your distance may be more or less depending on face shape, race, and other factors.

The new Oculus Quest 2 contains a manual three-slot IPD adjustment feature. This allows you to set the IPD of the display at either 58 mm, 63 mm, or 68 mm by pushing on the edges of the lenses to slot them into one of the settings. Then in the settings, the software adjusts the pixels on the display that your eyes see so that they are clear and centered in your eyesight. The manual touching of the lenses in order to slot them into place is a big red flag for many. In general, you want to keep hands away from the lenses and avoid touching them.

Another drawback of the new IPD adjustment is that it only supports specific distances, namely 58, 63, or 68 millimeters. If your IPD distance is between this range, you may find some discomfort when wearing the headset for long periods.

The original Oculus Quest features an adjustable inter-pupillary distance between 58 – 72 mm. A dial on the bottom of the headset allows you to adjust the distance of the lenses in real-time.

The Quest 2 has a brand new soft touch strap which is easier to slip on and off. The top strap of the headset attaches at the back of your head with a loop that goes around the side strap. The side straps have a two layer adjustable strap instead of velcro. You pull on the left strap to tighten the fit on your head and right strap to loosen the fit. The entire strap is softer to wear and better distributes weight around your head.

The nice thing about the original Quest is that the straps stay consistently tight. There is enough stretch in the band to remove and put it back on without worry. Early reviews of the Quest 2 say that you need to frequently re-tighten the strap around your head when you wear it. However, a good thing about the Oculus Quest 2 vs Quest 1 strap is that it is much lighter on your head and distributes weight better.

Oculus is selling an elite strap accessory with the Quest 2. It is a halo-band that is similar in fit to the original Rift S. There is a fit-wheel dial on the back that allows you to loosen and tighten the strap on your head. An additional accessory provides an external battery with the elite strap so that you can double your battery life too.

You can find out more information on Quest 2 accessories on the official page.

The Oculus Quest 2 features redesigned Touch Controllers. A few cosmetic changes have been made to them:

One drawback is that there appears to be less infrared sensors in these new controllers verses the last generation. This may lead to decreased tracking accuracy, but should extend the battery life of the controllers. Reviews say that most games you will not notice the difference, but fast-motion games such as Beat Saber may be less accurate in how they track.

Both the Oculus Quest 2 vs Quest 1 motion controllers have a halo called a tracking ring which emits infrared light for the inside-out headset to track easily in space.

The controllers have top x and y buttons, a top analog stick, a back index finger button and back middle finger button. There is also an Oculus button on each controller which is used to bring up menus for the game and for the oeprating system. Each controller is powered by a single AA battery.

One of the key messages in the keynote speech unveiling the new headset is that games are completely backwards compatible between the two headsets. This is awesome because it means that upgrading is completely optional if you already have a Quest. Over time, the new XR2 processor and improved technical specifications will be optimized to make games faster and higher quality. However at launch, the Quest 2 vs Quest 1 will be identical.

Oculus announced some brand new game titles to be released with the new headset too, including:

A new addition coming to all games are new challenge features to play against your friends with. As well, there is a new Oculus Move fitness dashboard in the Quest that shows you fitness information while you play.

Go and check out our upcoming Oculus Quest games here.

Other factors are either listed in the Oculus Quest 2 vs Oculus Quest 1 comparison at the top of the page or do not effect your gameplay and usage of the device. If you disagree, make sure to comment below and let us know!

Despite a long list of differences, the Oculus Quest 2 vs Oculus Quest 1 are actually very similar. The Quest 2 has a better processor and display, plus more RAM. This should be an overall win once developers figure out how to take advantage of the new hardware.

Most of the complaints for the new Oculus Quest 2 revolve around two things: the new soft strap and the lack of sliding IPD adjustment. For power users, the three slot IPD adjustment sucks. It takes away some of the freedom of the device and forces you into one of three silos. For the large majority of casual users, this simply won’t matter at all. Hardly any casual users know what IPD is and just simply won’t notice its effects in this three slot system. Requiring you to manually push the lenses into place is a cost-cutting measure that doesn’t sound very smart. Users who don’t share the headset much won’t notice this for the most part.

The new soft strap’s biggest complaint is that it needs to be frequently tightened each time you put on the headset. This seems like a minor annoyance when you say it out loud, but only takes a second or two. Oculus has spent a lot of time balancing out the headset and making it feel good on your head. Early reviews say that the soft strap does a better job of distributing weight correctly. Power users will easily be able to buy the elite strap accessory and the battery attachment for better battery life and comfort.

The $100 off the price tag on the new Oculus Quest 2 vs Oculus Quest 1 is a really great thing. This will allow even more casual players to join the world of virtual reality. It also offsets the cost of the elite strap for anyone upgrading and needing more comfort. For those choosing to stay behind on the Quest 1, complete backwards compatibility of all games is a great thing to note.

What do you think about the Oculus Quest 2 vs Quest 1? Which headset is right for you? Comment down below and let us know what you think today!