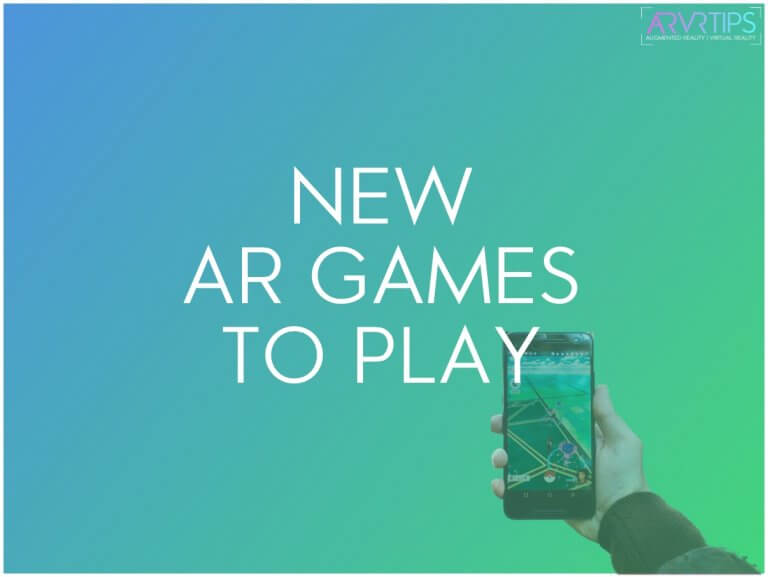 Playing augmented reality games allow you to fight aliens, capture fantastical creatures, and defend kingdoms in the real world. Finding new AR games can be tough because there aren’t a lot of great resources on the internet.

In this guide, we will showcase some new augmented reality games to download on to your phone today.

Compared to buying a VR headset, playing AR games is not expensive. Only an AR-enabled smartphone or tablet is needed.

If you know of any new AR games that we should showcase, comment down at the bottom of this post or contact us today! We like to partner with developers who want to advertise their games on AR/VR Tips.

ClipDrop is an augmented reality copy and paste app. You can capture a screenshot on your computer or take a picture with your phone and ClipDrop uses artificial intelligence to crop the background out automatically.

If that sounds impressive, it’s not even the best part.

You can take a picture on your phone and automatically drop it into place on your computer. ClipDrop supports copy and pasting between some of the most popular photo editing apps such as Photoshop, Sketch, Figma, Canva, and more.

Plus with your subscription, you get unlimited cloud storage. This means that you can save photos in ClipDrop and access them on all of your devices.

The app trended on the internet earlier this year when a demo was released. Since then, the developers have worked hard to release this as its own app. Check out the demo video below and then go and read our full ClipDrop review, tutorial, and setup guide.

Table Trenches is a battlefield AR game. You scan your table to transform it into a battlefield. You have to deploy forces, capture towers, and fight to the last in this real-time tactics game designed completely for augmented reality.

Version 2.0 of the game has just been released with local multiplayer and language support! It’s a unique new augmented reality game worth checking out today.

Landlord Go was created by Reality Games LTD to give AR enthusiast the opportunity to buy shares in properties around the world. As you build your real estate empire, you can buy the donut shop down the street or the Sydney Opera house.

The aim of Landlord Go is for players to become a virtual property magnate who trades in the world’s most famous real estate. You will buy, sell, and collect rent on iconic buildings and landmarks. The more shares you own, the more income you bring in. Use that income to buy more properties and become a powerful real estate tycoon.

The entire Landlord Go game takes place in augmented reality. You navigate around your neighborhood looking for different property to invest in. The game just launched in July of 2020 and is a brand new AR game.

Catan: World Explorers is a GPS map-centric new AR game from Niantic. The game is based on the widely known Catan board game. In the game, you need to find and collect several resources that you will use to build cities, towns, and roads. Your mission as a player is to try to accumulate a high number of victory points.

The game transforms the entire Earth into one giant game of Catan. Players will use their smartphone to view the world of Catan in augmented reality. While you’re playing Catan, you’re also able to explore the virtual recreation of your actual real-life surroundings. As you do, you will come upon different useful resources like Lumber, Ore, Wool, Brick, and Grain.

Niantic is the developer behind the Pokemon Go and Ingress game franchises, so you know that Catan will be quality.

This game comes out soon and you can sign up to be part of the beta phase, which launches soon. This new AR game could be a game changer for the technology.

Another exciting new AR game released this year is Wildeverse. Wildeverse uses AR to create a virtual forest that players can explore to find animals and clues. The game starts with a chat-based segment introducing players and setting up some context around the virtual environment to explore.

There’s an in-game timer that keeps track of how long a player takes to complete a mission. Wildeverse was created in collaboration with Borneo Nature Foundation and Goualougo Triangle Ape Project. These two organizations are at the forefront of science and protection of rainforests in Africa and Asia.

Wildeverse is one of the best story-driven augmented reality games we’ve ever played. There are a ton of great features and the game is easy to pick up and play.

The game can be played on any iOS or Android device that supports ARKit or ARCore. Check out our full Wildeverse review here.

Five Nights at Freddy’s AR is an augmented reality horror game. It came out in 2019, but constant updates make it feel like a new AR game. It uses your location to send animatronics after you or your friends as you scavenge for supplies.

You are a night guard in charge of watching different security cameras for animatronic toys who come to life. As you switch between cameras, you use up your limited amount of power that you have for each level. If you run out of power, watch out!

Audio and visual sequences used are unique to each character and will keep you glued to your smartphone. Five Nights at Freddy’s AR is available on both iOS and Android.

#7. The Walking Dead: Our World

The Walking Dead: Our World is similar to the popular Pokémon Go. Your real-world surroundings become a post-apocalyptic landscape. The landscape is riddled with supply crates, zombie encounters, and player-built shelters that serve as drop off points for survivors.

Though this game is not brand new, the developers recently updated the game with 3 new chapters to the storyline.

Unlike Pokemon Go, you can play this game staying in one place. The combat is a simple first-person shooting experience, with selectable guns. You have the option of pairing with characters from the Walking Dead TV show. You can access this game for free if you have an Android or iOS device.

Adobe Aero was designed to enable designers without coding knowledge to build AR experiences. You can build everything inside the app with step-by-step instructions provided. It integrated nicely with other Adobe Programs, enabling users to import 3D files from Dimension, and 2D layers from Photoshop and Illustrator.

It is built for both casual and professional users to create interactive AR experiences. Users can also use Adobe Aero with third-party software like Maya and C4D to place scalable objects into scenes viewed through their phones. Users can add animation triggers that react to touch.

If you’re an artist, Aero enables you to get into the world of augmented reality easily and efficiently.

Which new AR game is your favorite? Tell us down in the comment section.