Ryan William | Updated on August 18, 2021August 17, 2021
We’re reader-supported. When you buy through links on our site, we may earn an affiliate commission.

If you are looking for a VR ready PC without having to do a ton of research, you’ve found the right guide. In this post, we look at the best gaming setup for virtual reality games and apps. Put on your VR headset without worrying about whether your PC specs can handle it.

This guide is for people who don’t want to buy their own CPU, GPU, and other computer pars by themselves. If you are interested, we have a guide for building your own VR-ready PC too.

Between SkyTech, iBUYPOWER, CYBERPOWER, HP, all of the gaming PCs below meet the minimum requirements for Half Life: Alyx. Alyx is the number one and most advanced new VR game, so you want a gaming computer that meets its minimum requirements. It will ensure that your gaming PC can run any of the best VR games available today and into the future.

Before we show you the best gaming computers for virtual reality, let’s take a look at the minimum requirements for Half Life: Alyx.

When it comes to computer gaming, better hardware mean higher quality. Better parts also means higher costs, so you have to balance all of your decisions out. After all, you’ll want to put some money aside for games.

Built from the ground up with VR in mind, Half-Life: Alyx is the number one new VR game. It’s also the most intensive in terms of minimum requirements. If your PC can play Alyx, we are confident that it will play anything available in VR today.

The following are the minimum PC requirements for Half Life: Alyx:

By buying a PC that meets Half Life: Alyx’s specs, you’ll be able to run any virtual reality game on your HTC or Oculus VR headset.

Before we jump into some good PCs to buy, let’s have a look at the two processors listed above.

Intel i5 vs Rizen 5 for Gaming

The table below summarizes the comparison between Intel i5 and Rizen 5:

Despite some small differences in specs, both of these CPU processors are modern, new, and able to handle the latest VR games. The Rizen has a larger cache for storing data, while the Intel is able to perform more calculations per second.

The table below summarizes the recommended minimum graphics cards for Half Life: Alyx:

These two graphics cards both support the latest graphics APIs and display standards (DisplayPort and HDMI). That means you’ll be able to play modern games and use recent monitors without worrying about compatibility issues.

Overall, the two cards score very similar in specs. The AMD 580 is 10 months newer than the NVIDIA, which can be a big deal in hardware technology. However, the GTX 1060 shows reflections, lighting, and splatting better. The test for splatting involves getting the graphics card to render the motion of a flock of birds. Splatting tests how objects closely blend and separate from each other on the screen.

The AMD 580 has a much better parallax benchmark, which is the ability to render detailed surfaces with shadows. It means that the AMD’s picture quality is slightly more detailed on average.

If you want to be patient, the new Nvidia RTX 3070, 3080, and 3090 all offer exponential performance increase over the previous generation of GPUs. Prices start at $499 which is quite a bit higher than the 1060 or 580, but your GPU will be good for many years into the future.

Next, we get into which gaming computers for virtual reality are the best now and into the future. All of the PCs we list below are premade packages, ready to order today and start playing. You don’t have to build your own PC from individual parts in order to have solid hardware for VR.

At $699, the SkyTech Blaze II is the cheapest gaming computer for virtual reality we’ve found. In fact, if you find a VR-ready PC that matches our specs above, we want you to comment down below and let us know!

The system comes with a GTX 1650 GPU, a VR-Ready GPU that offers decent frame rates on modern games. The system should be able to handle most VR experiences at solid frame rates.

This gaming PC averages 63 FPS in 1080p on Epic settings in Fortnite. Bringing it down to High settings will put it over 80 FPS. The same goes for other lighter fare like Rocket League, where it earns 141 FPS at highest settings at 1080p. If you want to try out 4K, a GTX 1060 should be more than playable at medium graphics settings.

For $799, the Skytech Archangel comes with a better Ryzen 5 2600 CPU processor and newer GTX 1660 GPU graphics card. The Archangel is sweetly configured with a 500GB solid state hard drive and useful ports.

Gaming is the main highlight here, and the GTX 1660 Ti helps this PC excel as expected for a budget gaming PC. The desktop maintained an average 69 FPS on Titanfall 2, 68 FPS on Battlefield 1 and 47 FPS on Fallout 4 at 1080p resolution.

The SkyTech Archangel isn’t pricey and you are getting a speedy gaming system for your buck. It doesn’t stack up to more expensive gaming systems, but it’s still among the best in its class.

This hardware together will deliver a suitable VR experience for all VR systems available now. It’s all shown off inside a case with a full glass side panel and customizable RGB lighting on the fans.

Compared to our cheaper options option, the Element 9260 has a 1TB SATA hard drive AND a 240GB solid state drive. All parts can be upgraded after purchase to keep the PC relevant longer. Included in the price is a gaming keyboard and mouse. As well, you get free lifetime tech support and a year of free parts and labor should anything go awry. 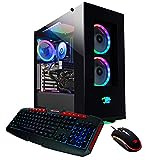 The ElementPro series from iBUYPOWER gets us into higher performance gaming computers for virtual reality. The 126a is $1099, which isn’t that expensive for what you get.

Plenty of gaming desktops have shiny, see-through glass panels, but how many of those panels double as full-on LCD displays? The iBuyPower Elite ElementPro 126a features a unique translucent side panel that you can customize. Place cool wallpapers or useful PC monitoring tools on the side of the desktop.

This gaming PC has more to offer besides a neat party trick thanks to an AMD Ryzen 7 3700X 3.6GHz and an NVIDIA GeForce GTX 1660 GPU. These are better than what Half Life: Alyx recommends and can power through 4K and VR games with ease. If you’re the type of gaming PC enthusiast who values aesthetics, the iBuyPower Elite ElementPro 126a is one of the most unique and desktops out there.

For $1399, the CyberPowerPC Gamer Supreme is one of the best gaming computers for virtual reality you can buy today. The highlight of this system is the NVIDIA RTX 2070 graphics card and the 1 TB solid state hard drive. This desktop can run mainstream games at high settings and even handle virtual reality without a problem. This gaming PC is very easy to open up, making it easy for those who want to upgrade to something more powerful later.

The CyberpowerPC Gamer Supreme is reliable for playing AAA games at 1080p and 60 frames per second. If you are serious about VR gaming, then this CyberPowerPC will keep you happy for a long time.

For $1999, the HP OMEN gaming computer is not for the budget-conscience. However, it comes with top of the line specs in all areas:

Who says you need a gigantic tower for high-end gaming PC power? The OMEN by HP hones the compact gaming PC concept to near perfection, cramming everything into a sleek chassis. It is the top of the line gaming setup you can buy for VR.

The liquid-cooled internal design on the OMEN keeps this small machine quiet and cool always. Naturally, the high price tag means it’s more ideal for hardcore enthusiasts. If you have the cash to spend and want to be able to customize every single aspect of your battle station, get the OMEN by HP. 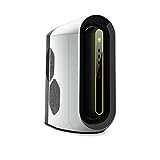 As one of the best gaming computers for virtual reality, gamers can experience unparalleled VR performance. This PC is a gaming desktop with an AMD CPU. It is entirely customizable – you can choose any graphics card you like.

While still offering an impeccable VR experience, this VR PC is a relatively low-cost option compared to high-end models. It has an enhanced airflow pattern, and the Legend ID ensures the airflow is fluid, reducing CPU temperatures.

This VR Gaming PC uses a 16-core 3rd generation AMD Ryzen processor. For the first time, the Alienware machine features a PCI-Express 4.0 Technology, enhancing the bandwidth for the graphics card. This allows for better VR performance like recording, creating, and streaming.

This gaming PC for VR also processes higher frame rates per second with high resolution. While VR gaming, you  never have to worry about game disruption from lagging or stuck screens in between gameplay.

Which PC is the best VR?

The CyberPowerPC Gamer Supreme and Alienware Aurora Ryzen Edition R10 are highly suited for VR. Be sure to read the reviews for VR PCs that you want to purchase for deeper insights into the specifications and features.

What kind of Gaming PC do I need for VR?

Which is the best gaming headset for VR?

The Oculus Quest 2 is one of the best and most affordable gaming headsets for VR. The display has a high resolution with more clarity, and the audio is very accurate with 3D positional audio for better audio recognition.

Which of these gaming computers for virtual reality is your favorite? Let us know what gaming setup you have using the comment box below.