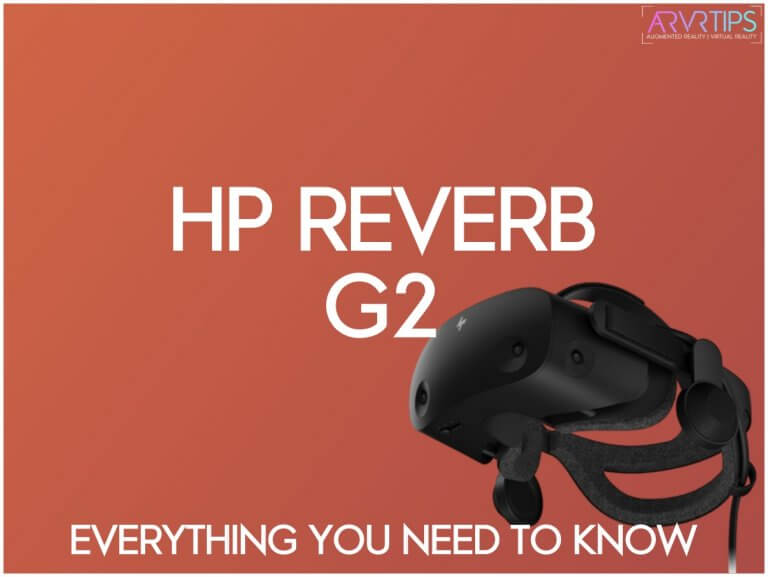 The HP Reverb G2 is the successor to the G1. It is the newest Windows Mixed Reality (WMR) VR Headset.

HP announced the Reverb G2 virtual reality headset on May 28, 2020. On the same day, the new headset was available to pre-order on the official HP website, with a shipping date to be confirmed later. September 15th has been the long-rumored released date of the G2, but this has not been officially confirmed by HP yet.

The G2 is the flagship VR headset from HP and it has a price tag of $599 USD. The headset is part of the Windows Mixed Reality (WMR) collection, a set of headsets optimized for Windows 10 and Microsoft’s mixed reality platform.

The HP Reverb G2 succeeds the original Reverb headset, which was released in 2019 and on sale for less than a year before the announcement of the G2. On the day the G2 was announced, the G1 was no longer available for purchase on the HP’s website.

The headset features a dual LCD RGB displays with a 2160×2160 resolution. The display has improved quality and decreased issues which were a main complete of the original G1.

The “screen door” effect found on the WMR headset has been drastically reduced. Mura, a cloudiness in your vision when you move your head, has also been largely reduced.

The headset has a adjustable 60-68 mm IPD, which is an improvement over the fixed 63 mm IPD on the original G1 headset.

The Reverb G2 connects to your PC via the included headset cable. It contains off-ear headphones which sit 10 mm away from your ears and provide quality sound.

Included in the box are two second generation Controllers. These controllers have a tracking halo which communicate with the tracking on the headset. The button layout is similar to the Oculus Touch Controllers, which should feel natural for most people. However, the controllers do not contain capacitive touch, meaning you must fully press the button to register contact.

More information about each of these components and the specs can be found below.

How to Buy the HP Reverb G2

There is one main way to buy this virtual reality headset around the world:

The original G1 was available to purchase on Amazon as well, so we expect this to be the case in the future once an official release date is announced.

Reviews on the headset are largely positive. A number of glaring mistakes on the original HP Reverb G1 have been fixed or improved on.

Here is a selection of reviews to check out:

Preferred Review: Eric For President has a brand new review of the HP Reverb G2 to check out:

Here are some other video reviews of the Rift S to check out. Underneath those, we break down each component in the VR headset.

The Reverb G2 retails for $599 USD. This is $200 more than the Oculus Rift S headset. However, it is widely known that Oculus sells its hardware at a discounted price in order to get virtual reality into the hands of more people. The company makes their revenue back from their share of each game sold.

So far, the G2 is only available from the official HP website. Other online and in-store retailers will be confirmed when the headset officially goes on sale.

The HP Reverb G2 comes with soft, adjustable straps that can be adjusted on the sides and top of your head. The face cushion has been improved over the original G1 to be more comfortable. There is double the area of padded cushion on the G2 over the G1. These improvements provide a more comfortable fit.

The audio headphones pictured above are off-ear and do not impact the feel of the headset when you wear it.

The HP Reverb G2 includes a single-barrel cable design between the headset and the computer. A special single cable plugs into your headset and a USB C 3.0 and DisplayPort plug into your computer at the other end.

The G2 includes a 6 meter (18 feet) cable, which is longer than other VR headsets by 3 whole feet.

The headset comes with two second generation Microsoft Motion Controllers. The new controllers have been upgraded over the first generation with a new button scheme that closely matches Oculus’ touch controllers and improved tracking in the halo of the controller.

The motion controllers have a halo which emit infrared light for the inside-out headset to track easily in space.

Finger sensors on the controllers do not have capacitive touch when you place your fingers on them. This means that controls for manipulating objects in VR are more limited. The grip button is now analog.

The controllers have top x and y buttons, a top analog stick, a back index finger button and back middle finger button. There is also a Menu button on each controller which is used to bring up menus for the game. A Windows button allows you to open up your WMR controls.

The HP Reverb G2 features a dual LCD RGB displays. The LCD panels have a refresh rate of 90 Hz.

The headset has 60 Hz and half-resolution modes so that computers with lower specs can still run VR games on the G2.

The headset has 2160×2160 per eye resolution. This is a higher resolution than any other consumer VR headset. The LCD panel was designed in conjunction with Valve to have higher brightness and contrast over the original G1 headset.

The Field of View (FOV) on the display is 115 degrees, which is the same as the original Reverb G1.

HP has reduced the amount of mura seen through the device. Mura is caused by inconsistent color and brightness from one pixel to the next, which makes the display look cloudy or foggy.

The HP Reverb G2 features an adjustable 60 – 68 mm interpupillary distance. A hardware dial on the bottom of the headset allows you to adjust the location of each display lense.

If you look on the bottom left side of the picture below, you can see the interpupillary distance adjustment button.

The HP Reverb G2 includes inside-out headset tracking, which means that there are no external sensors, base stations or hardware or required. This is the same tracking found on the Oculus Quest and Rift S headsets.

4 cameras located on the exterior of the headset point outward and keep track of your location in space and motion. Two of the cameras are on the front of the headset and one on either side.

The headset does not have a camera pointing upward, which can lead to a dead-spot in the tracking of the headset compared to Oculus headset.

The headset uses information in the VR sensor located in the headset and controllers to track movement. It’s software uses artificial intelligence (AI) to predict where the controllers are when it is outside the cameras’ field of view.

The HP Reverb G2 also includes a new passthrough feature, which allows you to view the real world outside of your headset via the front cameras without taking your headset off.

The headset features an IMU chip which is in charge of calculating specific force, angular rate, and orientation of the headset and the motion controllers. The IMU chip uses a combination of accelerometers, gyroscopes, magnetometers and other internal sensors to determine this information in real time.

The IMU is used to calculation position and motion when your hands are outside of the G2’s inside-out tracking camera vision.

The speakers provide immersive spatial audio, which is a 3D representation of sounds around you. The speakers can be adjusted to your head shape with an adjustable custom fit.

There is a headphone jack which adds support for basic and more advanced headphones. This allows you to add on your own on-ear or in-ear headphones.

The weight of the HP Reverb G2 is 550 grams which is about 52 grams heavier than the G1.

Games are found by default in the Windows Mixed Reality portal. WMR must be installed on your VR PC in order to configure the VR headset. Once you are setup, you can install SteamVR over top of WMR in order to access and play SteamVR games.

The WMR portal does not have any exclusive games, and SteamVR is the preferred VR game store.

With the announcement of the G2, HP and Microsoft announced that Microsoft Flight Simulator 2020 would receive VR support for the G2 first.

HP has announced a number of replacement accessories for the Reverb on their official website. Some of the accessories available are:

This new version of the HP Reverb G2 is touted as the most advanced VR headset of all time. HP has not announced pricing yet.

The following PC specifications are recommended for this VR headset:

You can find pre-built computers for VR or learn how to build your own PC today.