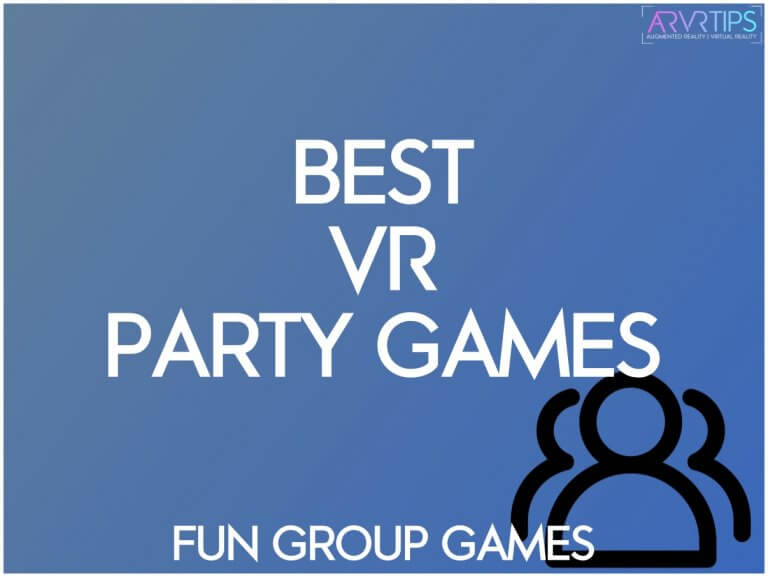 There are some great VR party games that you can play with your friends when they are over at your house. These games have the VR wearer playing one role, while their game pad friends work with or against them in real time. In this guide, we’ll go through all the best virtual reality multiplayer party games.

These games are some of the funnest and unique for VR today. So tidy away the glassware, clear some space, and maybe put the dog in the kitchen.

Let’s have a look!

Each player is given their own set of instructions and a unique set of controls to operate. Most of the time this means flipping a simple switch or adjusting a dial to a specific read-out. The catch is that the instructions you receive are for a control panel operated by another player. This requires you to communicate the instructions for them to perform instead.

It sounds relatively simple, but becomes more and more complicated as problems arise. You’ll soon find yourself frantically screaming commands over your fellow teammates as your spaceship crumbles around you.

Commands must be entered in a timely manner otherwise your ship will quickly fall apart. Buttons begin to break, fires break out, and mild gas leaks turn everyone into walking bobble heads. Luckily, each player has a handful of disaster prevention tools.

These minor complications do an excellent job at breaking up some monotony that comes with inputting a never-ending series of commands. Spaceteam can be played with 6 VR headsets or with one headset and a bunch of mobile phones.

For people who like VR party games with friends, Puppet Fever is a unique and fun experience for up to four players. In Puppet Fever, the VR headset player becomes the puppeteer. Everyone else has to figure out what word or phrase is being acted out.

Up to four players can actively participate as in game characters, able to shout out suggestions as the scene unfolds. The person inside the head that should be enjoying themselves the most. With its bold, vivid cartoon design, playing Puppet Fever can feel almost surreal at moments. Like you’re inside the TV looking out at everyone and it’s up to you to entertain them.

To begin, you are given a couple of cards to choose from. These can have any number of phrases, words, events, or films to act out. These cards can be swapped out until you find something you like. Once chosen, Puppet Fever gives you a couple of items that can help get you started.

There is a time limit to each round, so be efficient!

#3. Keep Talking and Nobody Explodes

Keep Talking And Nobody Explodes is one of the coolest games on this list. One player wears the VR headset, putting themselves inside a room with a bomb in front of them. The timer counts down and the goal of the VR headset is to defuse the bomb. The only problem is, they have no idea how to do that.

Everybody outside the VR headset has the 23-page bomb defusing manual, but they can’t see the bomb. The person in the VR headset has to describe what they see, and the players with the manual need to carefully give instructions. Inside the headset, you have to cut wires and flip switches to defuse the bomb correctly.

Think of it like an action movie, where an average person has to defuse a bomb with over-the-phone directions from an expert. The expert, in this case, is your friends.

The game requires a bit of setup to print out one or more defuse manual, but it is a ton of fun. Keep Talking And Nobody Explodes is available for any VR headset.

#4. Acron: Attack of the Squirrels

Using a variety of special abilities and items, the squirrels must retrieve the golden acorns located at the base of the massive tree. Squirrels must return them to their home base.

Meanwhile, the tree player uses their motion controls to toss rocks, balls of sap, and other useful projectiles at the invading squirrels. The tree has to prevent the squirrels from capturing all the acorns before time runs out.

Acron: Attack of the Squirrels is available now on SteamVR and Oculus (both Rift S and Quest). There is a Halloween-themed skin pack for an additional $1.99. There is also a new Haunting Horrors level available free to all players.

Rec Room has taken the multiplayer VR experience to new heights. Rec Room is a game that consists of extremely competitive mini games, and user rooms that deliver a unique experience to the player. Don’t expect a story line, because there isn’t one. Rec Room consists of hours of unrelenting fun!

With these mini-games, you can play with other (real) people in the world. Some of the best games are:

Another amazing feature of Rec Room is it allows cross play with any other headset. You can play with someone who has a Vive, Rift, Windows VR, or a PlayStation 4.

You can also choose how you move in the game. If you like smooth locomotion with no comfort at all, you can do it. If you feel sick with locomotion, you can change to teleport mode too.

Rec Room is a game you have to dig into in order to appreciate. There are days worth of enjoyment here. It’s a VR party game you can play with strangers on the internet or trade off with your friends in your house with.

In VR The Diner Duo, you play as a chef who must serve robot customers. You have to make sandwiches for robotic customers who enter.

The beginning levels are very easy, even on the harder difficulty. In later levels, more ingredients are added. Your simple burger and bun is transformed into a towering monstrosity that Dagwood Bumstead would have trouble finishing.

In the game, you are also surrounded by items to use. You have a grill for hamburgers, fish, and mushrooms, and a cutting area on the other side with a cucumber. Use your hands to reach for plates, ketchup, and mustard. When the orders start stacking up, the game is a pretty good workout.

Diner Duo is one of our favorite VR party games to play. Your friends can join with their phones or other devices (PS4) and you guys can work together to manage your restaurant.

Late for Work is a new entry into the genre of asymmetric VR multiplayer. In it, one VR player takes control of a King Kong-like giant gorilla. Up to four non-VR friends control tanks and fighter jets that are trying to stop the rampaging beast.

It features multiple maps and a handful of familiar game modes. In the ‘Hide and Seek’ game mode, each non-VR player has an item that the gorilla player wants. The non-VR players have to quickly drive around the map and hide. Meanwhile, while the VR player tears up buildings looking for the cars.

Another unique feature of the game is its locomotion system. To move around as the gorilla in VR, players have to grab the ground and pull it toward them. This is meant to simulate the knuckle-walking gait of an actual gorilla.

Late For Work is available on Oculus Rift and HTC Vive, so far. We hope it makes its way to the Oculus Quest soon, because this is VR party game is a blast.

Takelings House Party is a local party experience designed for up to nine players. One person is in virtual reality (VR), while eight more can join in via iOS and Android apps.

The VR player takes the role of Hal, an everyday bloke who finds his quiet suburban home overrun by little pests called Takelings.Mobile players assume the role of the Takelings.

Takelings scamper around causing chaos and Hal needs to get rid of them. Takelings House Party currently offers three mini games, a Free Play mode and a Party Mode.

This VR party game is really easy to pickup and play with your friends. It’s unique for our list because up to 9 people can play at one time.

In your VR headset, you are their eyes and ears, helping guide them to safety. The VR player watches the television monitor like a map, where they can see the entire layout of the building. They also get to see any objects and enemies within.

The purpose of Black Hat Cooperative is to direct the player out of the building safely. While this is only a two-player VR party game, it’s loads of fun to watch others play. You can easily take turns each time someone succeeds or fails.

Black Hat Cooperative is available on the Oculus Rift and HTC Vive.

This VR party game currently contains 4 levels, with a couple more to come in the future. To play Panoptic, you need two players sharing a single PC. One player wears the VR headset, while the other uses the PC’s monitor, keyboard and mouse (or game pad).

And those are our favorite asymmetric VR games!

Which VR party games is your favorite? Let us know below in the comment section.