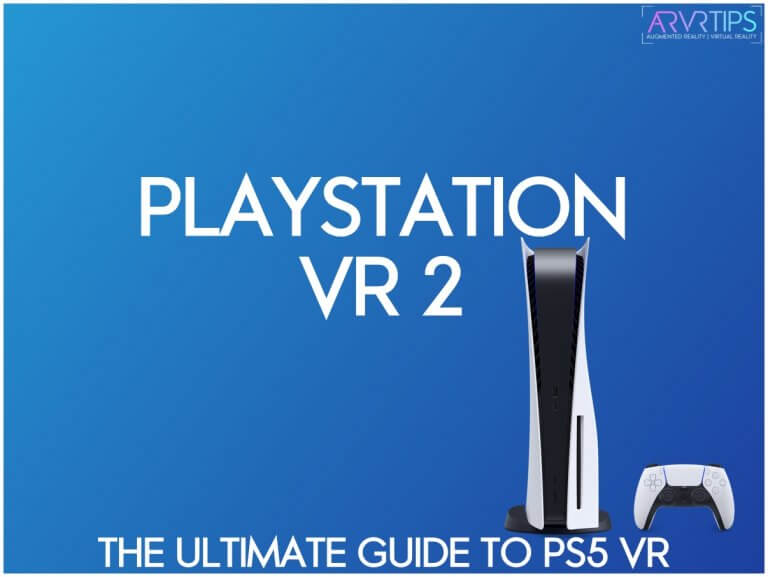 This is the ultimate guide to PS5 VR. We answer everything there is to know about PSVR2. Some of the things we will go over include:

If we’ve missed anything, make sure you comment down at the bottom of this guide and let us know!

How to Buy the Playstation 5

In order to play the Playstation VR 2 when it comes out, you will require a Playstation 5 console. You can buy the console below.

What is Playstation VR?

Sony announced that the Playstation VR headset would be completely backwards compatible with the Playstation 5 console. As you’ll see below though, this isn’t as straightforward as it sounds.

Before we jump into PS5 VR details and tell you how to get started, let’s just dig into some of the PS VR hardware and features you should know about.

The Playstation VR contains a 5.7 inch OLED panel with a display resolution of 1080p. This is quite a bit lower than the Oculus Quest 2 or HP Reverb G2 which contains near 4K displays.

PS VR contains outside-in VR tracking. The Playstation camera needs to sit in front of your TV and pointed at you. The camera tracks your controller and body movement in order to watch position, movement, and gameplay.

PS VR supports smooth picture output, which allows you to display your game in the headset and on your TV at the same time.

If you already own the Playstation VR, then none of the information above is new to you. The main question that everybody is asking is whether the Playstation VR works with the PS5 or not. Let’s dig into that topic next.

Sony has announced that Playstation VR has full backwards compatibility with the Playstation 5. This should mean great things for owners who want to play PS5 VR games. Despite the announcement of support, there are currently no new Playstation 5 games that support PS VR yet. Only Playstation 4 versions of PS VR games can enable virtual reality on Playstation 5.

This is a bummer for those players who want to buy a game like No Man’s Sky for PS5. Only the PS4 version will let you play in virtual reality.

But is that really it? Did Sony announce PS5 VR support only to never plan on any new virtual reality content? Rumors from the supply chain and new patents filed by Sony indicate that this is NOT the case.

Let’s dig into that further.

One reason why we think that Playstation VR is primed for a big upgrade in the future is because Sony has optimized the console for Unreal Engine 5. In addition to gorgeous graphics and gameplay, UE5 is also powering the next generation of mixed reality (augmented and virtual) content. Unreal Engine 5 doesn’t come out until 2021, but Sony already has stated support for the update.

So, it kind of makes sense that Sony is waiting until closer to the release date of UE5 before coming out with their new virtual reality hardware. This would allow some of the developers to upgrade their games for VR support once Unreal Engine 5 is in their hands for testing.

The following patents have been filed by Sony and approved, leaking out into public domain. This does not indicate exactly where PS5 VR is going to go, but patents are not trivial to design and submit. Thus we think that most or all of these rumours may actually be true when the PSVR2 is actually announced.

Like most VR controllers, they each contain an analog joystick and two main buttons on the top. It looks like there are index and middle finger triggers on the controllers as well.

Details in the patent note a number of different sensors located in the controller for position, speed, and motion tracking. This leads us to believe that the Playstation VR 2 will contain inside-out tracking.

In the same patent showing the new controller design above, there are references to inside-out tracking. The patent shows a camera on the front of the headset which views outward to track each controller. This would mean that there is no need for the Playstation camera sitting in front of your TV anymore, which is GREAT news.

When Sony released the PC VR, outside-in tracking via the camera was the most popular method. Over time, Oculus has shown that inside-out tracking provides nearly the same accuracy without an extra external device to setup. We believe that the PS5 VR hardware will contain a similar tracking method.

If you go back to a patent released by Sony in October of 2019, it also hints at inside-out tracking. This suggests that Sony has been looking at the change for a long time now. In the original patent, cameras on the front and pack of the headset are shown interacting with the controller. The original Playstation Move controller is shown in that original patent, which would have been before the new redesigned controllers were created.

Another early patent from February of 2020 shows a mock PS5 VR controller that contains full finger-tracking capabilities. The patent describes a “home-use game machine” which “detects the movement of a user’s hand”. Other wording in the patent talks about the lack of a need for controller input, meaning that it can detect fingers just based on where they are placed.

Again, this early patent does not show the redesigned controllers from October 2020. However, this feature patent can be applied to any controller design.

There are not many patents published yet that hint at a possible redesign for the PS5 VR headset. The one good look so far contains the same design as the original Playstation VR hardware. The design will have to be modernized to include inside-out tracking, so we should see some cameras places facing outward on the headset.

So while we only have teasers so far, Sony is definitely working on new virtual reality hardware to go along with the Playstation 5.

When Does Playstation VR Come Out for the PS5?

So all of these patents have been filed and approved. When does the PS5 VR come out?

Officially, the release date for Playstation VR2 has not been announced yet.

Sony has talked about not wanting to overshadow the release of the Playstation 5 with virtual reality, confusing customers and forcing people to pay more up front. It is smarter to allow players to pay for the console and then pay for virtual reality later on.

The release date of the original PS VR was 3 years after the release of the Playstation 4. We don’t expect that we’ll have to wait that long in this case. Christmas 2021 might be the perfect time to release PS5 VR for customers.

So until we get an official announcement, lets focus the rest of the article on getting the original Playstation VR working on the PS5.

Playstation VR on the PS5

What exactly do you need to buy for PS VR on PS5?

If you want to play the original PS VR on the PS5, what exactly do you need to buy? You need to make sure you have the following:

The adapter cable allows you to plug the PSVR camera into the Playstation 5. Sony will send you one for free if you click here.

How to Connect Playstation VR to the PS5

If you have an external hard-drive to plug into the Playstation 5, you won’t have enough ports unless you plug into the USB Type-C at the front of the console or use a USB Type-A hub to connect additional devices.

This should allude to the fact that the new PS5 VR solution will contain inside-out tracking and will not require the camera plugged into your console device at all. As it is right now, there are a few too many connections to your console to make everything run properly and this can seem clunky for a brand new console in 2021.

Otherwise, gameplay of Playstation VR games is identical on the PS5 as they were on the PS4.

Check out the price and buy some of the most popular Playstation VR bundles below. We expect prices to drop as the potential for an official PSVR2 announcement gets closer.

The Playstation VR headset is 2016 technology, so you would expect to see that it has fallen behind new hardware from Oculus and HP. Below is a comparison chart between the PS VR vs Oculus Quest 2 vs HP Reverb G2.

The biggest drawback of the Playstation VR over the Oculus Quest 2 and HP Reverb G2 is its outdated display. At only 1080 x 1200 pixels per eye, the maximum quality is more than half what you get on a newer headset. We expect to see a big increase in display resolution on the next PS5 VR hardware.

We also see a few areas where Sony was a bit too ambitious in the specifications of the original PS VR. 120 Hz refresh rate offers buttery-smooth graphic visuals in the games you play, but your eyes cannot process a refresh rate that fast. We expect to see a refresh rate closer to 90 Hz on the next version of the hardware.

As well, the original Playstation VR contains an adjustable software IPD range between 48 and 78 mm. We expect to see a more limited IPD in the 58-72 mm range and maybe one that is hardware adjustable too.

Price will also be the biggest factor in the upcoming hardware from Sony. Oculus changed the game with a $299 price tag for the Quest 2 for a device that works without a gaming PC or Playstation 5. We think Sony will have to meet this price point in order to entice new buyers.

If virtual reality is your main reason for looking at buying a PS5, then you should wait. All of your PSVR games will continue to work on the Playstation 4. In addition, none of the games are being upgraded to take advantage of the new console’s power. There are also no new VR games scheduled for release by Sony.

You can still play PS4 VR the same way you have for the past few years.

If you already own Playstation VR AND have the new PS5 console on order, then you can be up and running as soon as Sony sends you the free converter cable. Just keep track of your games, since only Playstation 4 VR games will be able to take advantage of virtual reality.

Some of the new patents that have leaked out are really exciting. Sony was a pioneer in the virtual reality space as we expect their PS5 VR solution to be next level as well.

We will keep this article updated with any news and rumors about virtual reality on the Playstation 5.

Are you excited for new PS5 VR hardware to come out in the near future? Did we answer all of your questions about the topic?

Make sure to comment below and let us know today.