Here’s Everything Announced at Meta Connect 2022 The Meta Connect 2022 keynote speech today brought on a flurry of announcements, including the Meta Quest Pro, Quest game updates, an augmented reality and metaverse update, and more. Below is everything announced today at Meta Connect.

The main announcement today was the new Meta Quest Pro. With pancake lenses, a Snapdragon XR2+ chip, a smaller form factor, color passthrough, and improved display, the Quest Pro is made for super-users and businesses.

The Quest Pro is available to pre-order today and is coming out on October 25th. It will cost $1,499.

The Pro comes with new Touch controllers, which are designed to interact better as extensions of your hands. The new controllers have their own processor, which can track your position in space without using the VR headset’s inside-out camera. There is also a stylus pen which you can attach to the controllers in order to draw in the metaverse.

The Quest Pro and controllers come with a wireless charging dock so that you can grab and use the headset whenever you need it.

Click here to read a lot more detail about the Meta Quest Pro.

Pre-order the Meta Quest Pro below! 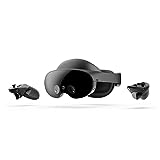 Mark Zuckerberg and Andrew Bosworth went over a number of VR game updates, highlighting how much money some of the games on the store have generates:

Over 1/3 of the apps in the Quest store have made over $1 million in revenue so far!

In addition to showcasing existing games, Meta also went over some upcoming games coming out for the Quest Pro:

Focusing on VR fitness games, Meta announced a new Meta Quest 2 Active Pack coming out soon. It features a new facial interface that is made for working out in VR. As well, it comes with wrist straps for the controllers that you can work out easier in VR.

Meta announced a flurry of new features and partnerships designed to help businesses connect and work together in VR.

New features are coming to Horizon Workrooms, including:

Magic Room is a new mixed reality app made for designers. It allows you to bring 3D objects into a common space and review them, no matter if you are wearing a VR headset, AR smart glasses, or on your computer.

Meta announced a new partnership with Microsoft to work together and build the future of the metaverse. Microsoft will be bringing Teams, Microsoft 365, and Windows 365 to the Quest platform.

As well, Microsoft XCloud Gaming is coming to the Quest as well. XCloud features the ability to play 2D games in your VR headset over a cloud connection.

Meta is working on a number of enhancements to the avatars you use in the Metaverse. A new graphical update is coming soon, which makes your avatar look more lifelike. As well, legs are coming soon to your avatar as well.

Meta is expanding avatars to other apps and platforms, and a number of enhancements were featured:

A new avatar store is launching soon, allowing you to pick and select different outfits for your character.

Meta did not show off any new augmented reality devices. However, they did summarize the Ray-Ban Stories, released last year, and preview some upcoming new features:

Luxottica is working on a new generation of Ray-Ban smart glasses to come out in the future.

Mark also demoed continued updates to its neural movement efforts. Using a wrist strap, Meta can detect subtle movements and translate those into gestures and actions in the metaverse. A brief demo of a game was shown where you can use movements to control a character on the screen.

Want to relive the keynote update-by-update? Here is a copy of the full keynote as we live-blogged it during the event.

What was your favorite thing announced at Meta Connect? Comment down below and let us know!