In this D-Link VR Air Bridge review, I’ll show you why this product is the perfect compliment to use Oculus Air Link to play PC VR games wirelessly on the Meta Quest 2.

If you have any comments or reviews about the Air Bridge, comment down at the bottom of this guide.

The D-Link Air Bridge is the perfect companion for Oculus Air Link. It’s connection point is built right into the Meta Quest operating system, so you get less room for latency. It might be a little expensive for a VR-only device, but anyone who has dealt with lag during PCVR gaming will easily see its value.

What is the D-Link VR Air Bridge?

The D-Link VR Air Bridge was specifically built to provide optimal wireless performance for your Meta Quest 2 VR headset. The VR Air Bridge is a wireless adaptor that plugs directly into your laptop or desktop computer’s USB-3 port.

The Air Bridge then wirelessly connects directly to your Meta Quest 2 headset, providing a direct wireless connection and allowing for an even better gaming experience. The D-Link VR Air Bridge is very compact and does not take up any additional space, and you can be sure to get enhanced speed and a better overall connection for all your virtual reality games.

How to Buy the VR Air Bridge

As soon as more global shipping options are available, I will update this post.

How Does the VR Air Bridge Work?

The VR Air Bridge works as its own dedicated wireless access point between your Wi-Fi and your Meta Quest 2 VR headset.

Usually, you would use your VR headset and play games wirelessly over your Wi-Fi network. The connection and speed depend on several factors, such as:

The VR Air Bridge creates a one-on-one wireless connection to the headset, allowing for faster speeds, better connection, and an overall better VR gaming experience. The Quest operating system is configured to directly connect and work with the Air Bridge, so you have the closest possible integration.

It’s the top way to use Oculus Air Link on your Quest 2.

It is incredibly easy to set up and use and is fully customized to work with the Quest operating system.

Having a dedicated wireless link between your Quest VR headset and your wireless connection allows for the ultimate PCVR gaming connection. The VR Air Bridge, once connected, will provide easy and uninterrupted connectivity for all of your VR games.

It offers low latency, meaning minimal delays and the fastest speeds possible. You also don’t have to worry about other devices connected to your Wi-Fi slowing it down.

Wi-Fi 6 is the next generation of wireless internet speed and connection. It still does all of the same basic things as before, such as connecting you to the internet but offers even faster speeds, more capacity, and less bandwidth congestion.

The VR Air Bridge is equipped with Wi-Fi 6 technology, meaning you will get the absolute best speeds and performance for your VR games.

Made Specifically for the Meta Quest

The D-Link VR Air Bridge was explicitly made for the Meta Quest 2 VR headset, which is fully customizable and compatible with the Quest operating system. This makes the setup easy as long as you have the most up-to-date Meta Quest software on your PC.

This also gives you peace of mind when using the Air Bridge, knowing it was built specifically for your VR headset.

Wi-Fi Protected Access (WPA) is the primary security standard for all devices equipped with Wi-Fi capabilities. WPA3 is the newest and most secure connection; however, it is still not recognized by all Wi-Fi devices yet.

The VR Air Bridge has been built with WPA3 Encryption, which means you will get the latest and best security on your Wi-Fi connection.

The D-Link VR Air Bridge has an incredibly compact design that can easily fit into the palm of your hand. This means you can plug it into your PC and not worry about it taking up much desk space.

The Air Bridge is also incredible to travel with as it can be placed away in any small pouch. All you need is the stick, the dock it plugs into, and the small USB3 cord that comes with it.

To setup the Air Bridge with your Quest 2:

We did notice the most optimal connection was when we had the VR Air Bridge in the same room we were using our Quest headset.

The Air Bridge sits nicely upright on the desk in its vertical stand.

What I Like About the D-Link VR Air Bridge

I love the idea of playing PCVR games on my Meta Quest headset, but a wireless connection through my router always had its flaws. The VR Air Bridge did precisely what it advertised it would.

I noticed that my online games had less latency and the overall connection and performance were strong. Wi-Fi 6 is a nice bonus.

In my household, we have many devices connected to our Wi-Fi network simultaneously, and online gaming can get slow and laggy sometimes. The VR Air Bridge completely changed that and provided a fast connection for all of the VR games that I tried with it.

I also liked how incredibly easy it was to set up the VR Air Bridge and start using it immediately. I already had the Quest Link software on my computer with the most recent version, so I was able to plug it in and start using it in a matter of minutes. It instantly connected with no runaround at all.

The last thing worth noting is how compact and small the Air Bridge is. It easily plugs into your PC and sits on your desk or floor with its vertical stand. It’s not nearly as big as a router and takes up little to no space.

The fact that you have to spend extra money to get a better wireless experience may be a turnoff for some consumers. If you paid for a good Quest router, you would expect to get an optimal connection already. However that is not always the case, especially if you have many devices connected to the same network.

It will come down to personal preference if you want to spend extra to get a faster and better wireless VR gaming experience.

One other thing that I’m not a fan of is that the VR Air Bridge is not compatible with the Quest 1 VR headset. There are rumors that Meta will expand support for the Quest 1 one day, but it seems silly to block this connection in the software only. These are the types of decisions that undermine the customer.

There are two main alternatives for playing PCVR games wirelessly on your Quest 2 if you don’t want to buy the Air Bridge: Oculus Link and a dedicated router.

If you want to try Oculus Link, you can buy the cable below. 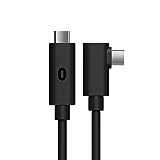 A dedicated Wi-Fi router will also give you a wireless connection to your Quest 2, similar to the Air Bridge. If your router is truly dedicated and you don’t have other devices connected to it, this option can work almost as well as the VR Air Bridge.

I saw almost because the Air Bridge has the advantage of being integrated right into the Quest 2 operating system. It leaves less room for error and messing around.

If you do go with a router, I recommend a good Wi-Fi 6 router to take advantage of the new technology.

Or buy our top pick from Asus below:

Does the VR Air Bridge work with the Oculus Quest 1?

No, the VR Air Bridge is incompatible with the Oculus Quest 1 headset. But, this seems to be merely a software limitation, so we could see it becoming compatible in the future.

Does the VR Air Bridge work with any HTC, Pico, or HP VR headsets?

No, the VR Air Bridge is not compatible with any other VR headsets except for the Quest 2. It was built to work directly with the Quest operating system.

Is the VR Air Bridge better than a router for Oculus Air Link gaming?

The VR Air Bridge is much better than a home Wi-Fi router for Oculus VR gaming. It is cheaper, smaller, and offers much better signal strength, latency, and bandwidth. I would highly recommend it if you have a Quest 2 headset.