Ryan William | Updated on June 11, 2021June 11, 2021
We’re reader-supported. When you buy through links on our site, we may earn an affiliate commission.

Oculus recently announced and came out with Air Link, a Virtual Desktop alternative that lets you play PC VR games without any wired connection. In this guide, we compare Oculus Air Link vs Virtual Desktop to determine which solution is better for VR wireless streaming.

We’ll take a look at and compare:

The latest update for this guide was in summer 2021. Virtual Desktop has released an ASW alternative called synchronous spacewarp (SSW) that help to keep the framerate high while using Virtual Desktop. SSW is an alternative to Oculus’ ASW feature. Read more details below.

Comment down at the bottom of this guide and let us know which application you prefer between Oculus Air Link vs Virtual Desktop!

What is Virtual Desktop?

Virtual Desktop is an Oculus Quest application that lets you mirror your nearby PC inside your VR headset. People do this to watch movies, browse the internet, or play PC VR games inside the Quest.

You don’t need a fancy gaming PC with a premium CPU to make basic functions work. Your basic laptop will be able to mirror to your VR headset just fine. However, playing high quality VR games will require an appropriate gaming computer.

The VR Virtual Desktop application has been in development for 5 years and the mobile and PC versions even longer. It has worked out a lot of its bug and has been optimized for VR.

Read our tutorial guide on how to set up Virtual Desktop on the Oculus Quest.

What is Oculus Air Link?

Oculus Air Link is a wireless alternative to Oculus Link that requires no Link cable or tethered connection to your PC. Like Oculus Link, Air Link allows you to wirelessly play VR games in your Oculus Quest headset.

Once connected, you can play any PC VR game from the Oculus or Steam VR store on your Quest 2. This gives you access to all the best PC VR games as long as you have a gaming PC that can play them.

Overall, between Air Link vs Virtual Desktop, both applications serve a similar purpose. But which one is better for VR wireless gaming? We will compare the two in more detail next.

Read our tutorial guide on how to set up Oculus Air Link.

In order to use Oculus Air Link or Virtual Desktop, you must have the following:

In order to achieve the lowest latency with Virtual Desktop or Air Link, connect it to a dedicated wireless access point (WAP). A WAP is a dedicated connection for your headset that doesn’t fight over with other devices on your network.

You will also need an Ethernet cable for your dedicated router to connect to your PC.

Below are the AC and AX routers we recommend for both Air Link and Virtual Desktop. 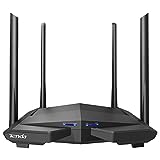 Virtual Desktop is available to buy from the Oculus store for $20 USD. That application installs on your Quest headset. Then, you have to download the VD Streamer application for free from the official website and install that on your computer. After that, you are ready to set things up.

On the other hand, Oculus Air Link is FREE to download and use. You must have v28 of Oculus’ VR firmware installed on your computer and headset. After that, you just need to enable Air Link on both sides.

Setting up your dedicated wireless access point is identical for either solution.

If this seems complicated, don’t worry!

We have step-by-step tutorial guides for both Virtual Desktop and Air Link to get you started.

Verdict: Between Oculus Air Link vs Virtual Desktop, the setup process is very similar and within a few clicks. We give this one a tie.

ASW activates as the headset rotates and moves in 6DOF. It extrapolates and smooths frames, reducing judder to make VR more comfortable.

ASW has a few other benefits:

ASW works within Air Link to transmit VR video smooth and quick. In the screenshot below, you can see how ASW corrects graphics warping to look more pleasing to your eyes.

In Virtual Desktop version 1.20.9, a new feature called synchronous spacewarp (SSW) was introduced. Like ASW, SSW reduces stuttering when your PC has framerate dips and isn’t able to reach 90 or 120 fps. In these cases, it renders the game on your PC at half-framerate and then generates the missing frames on your Oculus Quest 2.

Where ASW is performed by Oculus at the computer, SSW is performed in the headset. The Quest 2 has extra processing power available for PC VR games and SSW uses this intelligently when needed.

The developer of Virtual Desktop claims that the quality of the extrapolation is better with SSW vs ASW. You can see the demo video below and decide for yourself.

Verdict: Both ASW and SSW do a great job to improve performance of PC gaming. While Oculus had the original advantage, this is now a DRAW. Virtual Desktop is better because the load is placed on your headset, which has the extra capacity for processing. However, this does affect battery life.

Oculus Air Link connects into the Oculus ecosystem with private APIs. Being developed internally by Oculus allows them to use special features to optimize wireless streaming, such as ASW above. This should give ultimate compatibility with Oculus’ PC VR games.

On the other hand, Oculus does not interact with Steam VR in any official way. So, don’t expect any official compatibility between Air Link and Steam.

Verdict: Due to the full internal compatibility, we give the advantage to Oculus Air Link. However, games that are only available on the Steam VR platform should be equivalent or better on Virtual Desktop.

Virtual Desktop recently released an update to include full 120 Hz refresh rate support on the Oculus Quest 2. This means that your game stream runs buttery smooth in your headset.

As of the v29 software rolled out on the week of May 17th, Oculus Air Link also supports 120 Hz! Instructions on how to activate it have been added to our Air Link Setup Guide.

Verdict: Air Link vs Virtual Desktop for refresh rate, there is no advantage! Both software tools allow 120 Hz.

As soon as Air Link was released, VR players immediately noticed that the picture quality was a lot better than VD. Air Link uses less compression in their video and a true-to-scale color profile.

On the other hand, Virtual Desktop compresses the video in order to save bandwidth and reduce latency. There are different color profiles to pick from in the VD settings to try to remedy this. The “high contrast” profile is the closest option, but it tends to darken the image noticeably.

Pictures are hard to tell, but you can see the difference in picture quality between Air Link vs Virtual Desktop in the screenshots below. For more of a comparison, we have a video down at the bottom of this guide to go and check out!

Virtual Desktop has been praised for its ability to control latency and offer smooth wireless streaming. A lot of development time has been spent to reduce latency.

Early user reviews on Air Link suggest that Oculus has hit one out of the park here. Despite latency measurements that are equal or worse than Virtual Desktop, the quality is noticeably premium.

Competitive Beat Saber players weighed in on Reddit to say how well they could play the game wirelessly using Air Link. When it is set up properly, especially using a dedicated access point, Air Link provides top-level experience.

Verdict: Oculus Air Link, but your results MAY vary.

Many users have noted so far that there appears to be a delay in Air Link when using your left joystick. Physical controller motion is not effected so this only happens when moving in games.

This is an early bug that Oculus will need to fix for gamers and the cause is unknown.

Virtual Desktop does not have this issue at all.

Virtual Desktop has added dozens of granular settings to adjust and play with. In the settings, you can adjust:

On the other hand, Air Link has a “set it and forget it” approach right now. Once you activate the service, Oculus takes care of everything for you.

Verdict: If you like to tinker and fine-tine your experience, Virtual Desktop has more options to configure.

VD’s biggest advantage is its development time. It has done an excellent job for five years at reducing bugs and improving latency. There are plenty of granular options you can configure in the settings to optimize your performance.

However, Oculus Air Link is a worthy and superior competitor. Internal integration with the Oculus ecosystem means that it can wireless stream games with accurate picture quality and low latency. It has better game compatibility with all of Oculus’ PC VR titles.

Air Link has a few bugs it needs to work on. Namely, controller latency can be an issue. We will keep everyone updated as improvements are made.

Air Link is also completely free, which is a huge advantage for an equal or better service.

Give it a try today and see for yourself!

Want to see Virtual Desktop vs Oculus Air Link side by side in video? Check out this comparison done by Virtual Reality Oasis below.