Ryan William | Updated on February 10, 2022February 10, 2020
We’re reader-supported. When you buy through links on our site, we may earn an affiliate commission.

Shadow is a remote gaming PC service that gives you a virtual PC that can run all of the latest games. In this guide, we’ll show you how to setup Shadow PC with the Oculus Quest so that you can have a fully-usable gaming PC for virtual reality games.

This guide has been updated for 2022 following the official release of the Shadow VR app in early access! It is now easier to connect to your Shadow cloud PC from the Meta Quest.

With Shadow PC, you pay a monthly fee for the service. This way, you don’t have to spend hundreds of dollars on a pre-made full gaming PC. Or money building your own VR-ready PC. It’s a revolutionary new service that has gathered a lot of attention.

With an Oculus Quest and the Virtual Desktop application, you can play all PCVR games on your Quest 2 or 1.

Comment down below if you have any trouble getting set up!

What is Shadow PC?

Shadow PC is a remote gaming PC service that gives you virtual access to a full computer setup in the cloud. The specs of the PC are equivalent to a high-end gaming PC. In recent months, Shadow has been a popular option for people to get a gaming PC without buying all of the components.

Specifically with the Oculus Quest, users can use Virtual Desktop to stream PC VR games remotely to their Quest headset. With our Virtual Desktop setup guide, you can play games with minimal latency and it will feel just like you have a PC in your home.

Shadow PC comes with a ton of really nice features that are catered for virtual reality game players:

Otherwise, Shadow functions exactly like a high powered gaming PC. You can install any games and apps on the computer and play PCVR games easily.

Previously, there were three different configurations of Shadow to rent: Boost, Ultra, and Infinite. In May 2021, Shadow was purchased by HubiC, the company that also runs OVH Cloud. At that time, Shadow was simplified to only offer one single plan.

Here are the requirements for using the Shadow VR cloud PC:

Below, we’ll show you how to install and use the Shadow VR app from SideQuest.

You can sign up for Shadow on their official website. You have to go on a waitlist for your cloud PC and Shadow will contact you when it is ready to set up. The wait times differ by country and state, so click on this link to find out exactly when you will be able to setup Shadow PC.

If you enter in the promo code RYACDVES during checkout on the website, you will receive $5 off your first month of Shadow Boost.

To use the Shadow PC referral code:

Continue on and complete the process to setup Shadow PC! When your subscription goes live, you will receive an email and then you can follow our steps below.

SideQuest is a third-party app store for the Oculus Quest. It contains hundreds of games separate from the official Oculus Store, which has stricter measurements in place for approving games. The new ShadowVR app on SideQuest allows you to access your Shadow PC remotely without the need for a gaming PC.

Previously, Virtual Desktop was the only way to setup Shadow PC with your Quest. This new app is a much better way to get your cloud gaming computer up and running. Our setup guide below has been updated to use this new ShadowVR app method. If you’d still prefere to use Virtual Desktop with Shadow PC, then we have those instructions underneath still.

How to Setup Shadow PC With the Oculus Quest

In this guide, we’ll show you how to setup Shadow PC with the Oculus Quest so that you can wirelessly play PC virtual reality games from the cloud. We’ll help you install Shadow PC directly on your Oculus Quest headset in order to get up and staretd.

When you are off the waitlist you’ll receive the email from Shadow to setup your cloud PC. Follow the instructions to get things configured by clicking on the Windows or Mac link in the email and follow instructions to install Shadow on your regular computer.

When you launch Shadow on your computer, you’ll have to login with your credentials.

Before you start your Shadow PC, turn off Automatic bandwidth configuration and set your allocated bandwith according to your internet download speed test:

Then, you can click the red Start button to load up your Shadow PC. If this is your first time, you’ll have to run through a basic Windows setup before you can see your Desktop.

First you need to download and install SideQuest onto your Quest headset if you haven’t yet. We have a full step by step guide on how to setup SideQuest VR here. If you click, the link will open up in a new tab so that you can follow those steps and then come back here.

Install the ShadowVR app from SideQuest

The ShadowVR app allows you to connect to your cloud PC without any other hardware or software. Connect your Quest to your computer. Click here to view ShadowVR on SideQuest. Click on the Install to Headset button to install the app on your Quest.

Make Sure Shadow PC is Up-to-Date, Launch Steam With Windows, and Disable Password

Before you launch things in your Quest VR headset, log in to Shadow PC from any 3D device (phone or desktop) and make sure everything is up to date. As well, you’ll also want to set Steam to launch with Windows to make things easier in your Quest.

To launch Steam with Windows, launch Steam and from the Steam menu, go to Settings and then into the Interface tab. Enable Run Steam when my computer starts and Run Steam in Big Picture Mode.

To disable your Windows password, click on the Start menu in Shadow PC and type netplwiz and select the netplwiz program from the list. In the Users tab, uncheck the option Users must enter a username and password to use this computer. You’ll have to enter in your current password twice to change these settings, but you won’t be prompted the next time you launch into your Shadow PC.

In Shadow PC, download and install Steam, Steam VR, and Oculus Home. During the install of Oculus Home, you can click on skip headset setup. Make sure you reboot your Shadow PC after you are done the install. You can also download or log in to Steam and get any games you wish to place on your VR headset.

Go through the general setup progress to pick a name and password and get it setup on your network. Make sure that you turn on Access Point mode. This can be different for each router, but will most likely be a toggle button in the settings.

Connect Your Oculus Quest 2 (or 1) to Your Router

In your Oculus Quest, launch the ShadowVR app from your Unknown Sources apps page. Enter in your Shadow credentials and you will automatically launch into Windows and SteamVR without any extra steps to setup Shadow PC. 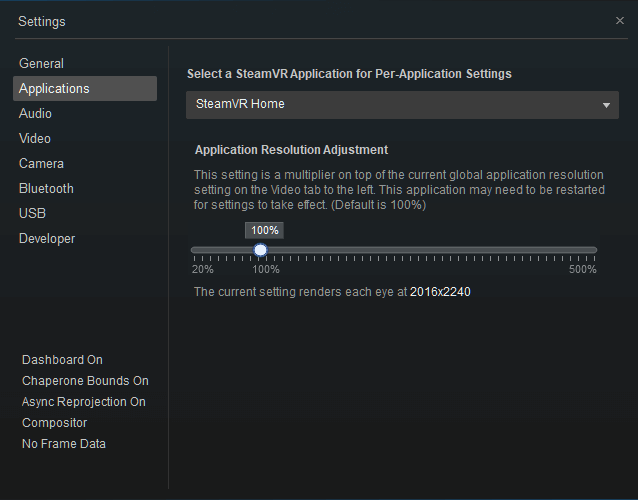 In SteamVR, navigate to Settings > Video and set the Application Resolution to 100%.

You are now configured and ready to play PC VR games from your Shadow PC! With this setup, you should be optimized for low latency on your Shadow cloud PC.

You shouldn’t need to launch Shadow on a PC again, but its a good idea to check things out there first if you run into any issues. Its also best to update the cloud PC every once in a while so that it has the latest settings from the server and has all of the newest bug fixes.

If the direct Shadow PC app for the Oculus Quest does not work, or you prefer Virtual Desktop, here are instructions to help you get up and started.

Once you have the original version of VD installed from the Oculus Store, click here to visit the SideQuest version of Virtual Desktop. Click on Install Latest and let SideQuest install VD on your Quest.

As well in your Oculus Quest headset, you should configure Virtual Desktop to optimize streaming and completely setup Shadow PC. Launch the Virtual Desktop settings and make the following changes:

You should now be able to wirelessly place any VR game in your Oculus Quest headset. You’ve setup Shadow PC and it will handle all game processing remotely in the cloud. Your Quest VR headset will render the game in the virtual desktop app. It will feel like you are playing a VR game the same as on the Quest natively.

Shut down Shadow PC when you are done

When you are done playing, shut down Shadow PC through the Windows start menu. This will give you computer a break and will launch it into memory from scratch the next time you want to play. This way, there won’t be processes left running in the background and taking up cache space the next time you play.

You can connect USB devices such as a keyboard, mouse, or game controller to your Shadow PC! Just plug the device into a USB slot on your real computer and then check Shadow’s controller tab to make sure it was detected. This will also work with microphones and webcams too.

If you are having trouble choosing the right bandwidth to use, run this Speedtest first. Then, set a bandwidth of 10-15 mb/s lower than your current download speed for the best experience. This way, you won’t be throttling or maxing out your connection.

You can also enable “Adapt max bit rate to network conditions” in your Shadow’s settings so that your Shadow can automatically adjust your bandwidth consumption for you!

Keep your GPU up to date

Like a real computer, it is important to keep your Nvidia GPU drivers up to date. If you don’t want to do this manually, you can setup Shadow PC to update your drivers automatically.

Enable “Keep my Shadow’s graphics drivers updated” on the Quick Menu to keep your GPU driver up to date.

Are you having any trouble trying to setup Shadow PC? Comment below and we will help you out the best we can! Once you are up and running, you will see how convenient and awesome this service is for Oculus Quest 2 users who don’t want to pay for a full gaming PC setup.