Ryan William | Updated on August 10, 2022August 10, 2022
We’re reader-supported. When you buy through links on our site, we may earn an affiliate commission.

If you want to share your view from your Oculus Quest 2 or 1 to your family and friends, you can cast to any Chromecast device. In this guide, we go over the best Chromecast for Meta Quest VR casting.

For each device, we go over:

If you have a different Chromecast device, comment down below and let us know what you are using!

What is the Best Chromecast for Meta Quest VR Casting?

In a rush? Click the links below to check out our top Chromecast devices today.

Originally, you could only cast Oculus Quest video to a compatible Chromecast device. This meant an official Chromecast or an Nvidia Shield. In 2020, a software update enabled the use of all compatible hardware with Chromecast capability built in. Android TV boxes (including Android smart TVs) can now be used for Oculus Quest casting.

Below, we have different options for your price range.

How to Cast Oculus Quest to Chromecast

Once your Chromecast hardware is powered on and connected to the same Wi-Fi as your Oculus Quest, casting is easy:

Your Oculus Quest video should display on the TV after a few seconds.

Next up, we review our top picks for Oculus Quest casting hardware below.

The Google Chromecast 3 is the original hardware straight from Google. It is one of the best Chromecast devices for VR. The resolution of this Chromecast is up to 1080p at 60fps.

Casting your Oculus Quest to the Chromecast 3 is simple. Just plug the device into your computer, connect to Wi-Fi, and select your Chromecast from your casting options in the Oculus App.

The Chromecast 3 is perfect for VR casting except for one small flaw. The latency from the Oculus Quest to the Chromecast 3 is about 1 to 5 seconds depending on your wireless internet connection. If you play Beat Saber or other fast-moving games, casting can be distracting because your movements don’t line up with your TV. The Chromecast Ultra, featured next, fixes this problem in a few ways.

Other than VR casting, the Chromecast 3 supports all other media services. Watch YouTube, Pandora, Netflix, Amazon Prime Video, and other services on any TV in your house. It lets you watch movies, shows, and photos streaming on your TV from any of your hand-held devices.

If you’re looking to purchase a Chromecast device for VR to cast your headset videos, you won’t go wrong with Google Chromecast 3

Nvidia Shield Pro is a powerful Android TV box with Chromecast Ultra hardware built into it. Unlike the Google Chromecasts above, the Nvidia Shield is a fully-powered Android operating system. You can download applications to it, play console video games with Nvidia GeForce Now, and more.

For Oculus casting, the Nvidia Shield will show up in your Oculus app the same as a regular Chromecast device. The Shield Pro has a Chromecast Ultra built into it, which means 4K streaming and low latency. If you are already planning to spend the money on the Ultra, a little more will give you the best Android TV box available.

The Shield Pro has access to the full Google Play Store. From there, you can install apps like Netflix, Kodi, Plex, and Spotify. The Nvidia Shield Pro comes with a 16 GB hard drive, 3 GB of RAM, and USB 3.0 ports. It features voice search, motion-activated, backlit buttons and a built-in lost remote locator. You can control the device hands-free with Amazon Alexa or Google Home.

The Nvidia Shield Tube is a simplified version of the Shield Pro above. You save $50 in price but lose a few key features:

If you don’t plan on using the Android TV features as much, the Shield Tube allows you to save a few dollars.

The Sony X900 smart TV has awesome picture quality and runs its smart platform off Android TV hardware. It is an Nvidia Shield built in to your smart TV. And as of a software update in early 2020, the Oculus Quest can cast to any Android TV device. Casting latency is not as good as Chromecast Ultra devices, but still well serviceable.

The Sony X900H Smart TV has glorious 4K video rich with real-world texture. It is powered by a 4K HDR X1 processor and comes with a hard drive, built-in RAM, and everything else you need.

The X900H smart TV is equipped with Google Assistant and voice control to control your smart home devices. You can easily search for movies or shows with your voice. It is also compatible with Amazon Alexa. You can stream smart camera feeds, play music, and launch video apps.

If you have an Oculus Quest and need a new Smart TV, the Sony X900H will let your cast your headset to the TV. The X900H comes in a few different size options, which you can view in the Amazon listing below.

The Hisense H5500 is another smart TV with Android built in to its smart platform. It is another way to activate casting from your Oculus Quest 2 or 1 without any additional hardware. The Hisense H5500 isn’t a slick as the Sony in terms of looks, but you will save on the price. It comes in 32, 40, and 43 inches.

With this smart TV, you can stream over 500,000 movies and shows from popular apps like YouTube, Hulu, and Netflix. You can also watch sports, live news, and much more. It comes with an in-built Google Assistant for access to entertainment and control of your smart home devices with your voice.

The Hisense H55 also Bluetooth audio support, so you can stream audio to a wireless speaker or headphones. 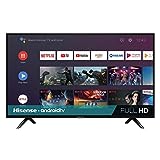 The MECOOL KM2 is a basic Android TV box. It is powered by Android 10.0 for enhanced functionality. VR players can easily cast their headset video to the device. The Android TV hardware lets you turn any TV into a smart device.

This Android box has different connectivity options including wireless, Bluetooth, and EnterNet. Plus, it supports streaming from YouTube 4K, Amazon Prime Video, Netflix, and HBO MAX.

This Android TV Box supports high clarity 4K HDR, 4K Ultra HD resolution, and high dynamic range. It is also equipped with voice control functionality. This allows you to search for photos, set an alarm, and check weather conditions with your voice. 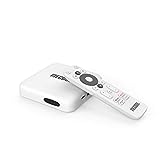 You can also watch your favorite videos through different streaming apps, including Disney+, Hulu, Prime, and YouTube. The Pendoo Android TV Box features audio and video upscaling. It is perfect for watching HDR and 6K Ultra HD video content.

Using this device is simple. Plug the device into the HDMI port and connect to the internet via Ethernet or Wi-Fi. In your Oculus App, it will come up as a casting option.

The Chromecast Ultra is a premium Chromecast device for those who want the fastest casting. The device is better than the original Chromecast 3 in a few ways:

With the Chromecast Ultra, latency from your Oculus Quest drops to one second or less in most situations. You can still notice a delay in Beat Saber, but only the smallest amount. Oculus is regularly improving latency via software updates.

Otherwise, the Chromecast Ultra contains all the other features that the regular Chromecast 3 has. You can cast content from any device to it and turn any regular TV into a smart TV.

And those are our picks for the best Chromecast devices for the Oculus/Meta Quest.

What Chromecast device do you use to cast your Oculus Quest video? Comment down below and let us know!