Ryan William | Updated on December 28, 2021January 12, 2021
We’re reader-supported. When you buy through links on our site, we may earn an affiliate commission.

Are you interested in the Bigscreen VR app for Oculus and Steam?

Do you want to watch movies, television shows, and live TV channels in Bigscreen?

Do you want to play computer games remotely in your VR headset?

Do you want setup and troubleshoot tips for the app?

Then you’ve come to the right place! Like Virtual Desktop, Bigscreen is a really nice remote desktop application for VR.

Check out our table of contents below and then keep scrolling to learn how to setup and use the Bigscreen VR app.

Latest Update: Bigscreen VR has added dedicated servers to the app and has also increased room sizes from 4 up to 15 people!

Recently, Bigscreen added 172 FREE TV channels that you can stream within the app. When you join a lobby to watch, you can also invite friends into your room and watch together. Scroll down and see some of the channels added below.

What is Bigscreen VR?

Bigscreen VR is a virtual world you can visit alone or with other friends. You can socialize, watch media, and play games inside one of the apps included with Bigscreen.

Some of the biggest uses of Bigscreen are to:

You can also meet new friends in the app too, hanging out in lobbies and watching things with 11 other players.

Bigscreen has elements of Virtual Desktop built into it, allowing you to play games remotely. It has a bunch of other social features though so that you can connect with your friends in virtual reality. Our BigScreen VR vs Virtual Desktop comparison guide has all of the details.

What VR headsets does Bigscreen work on?

The follow VR headsets are supported by the app:

Playstation VR and Mac support is coming soon! The app used to support Oculus Go, but that ended following Oculus’ decision to drop support for the hardware.

If you want to know how to setup Bigscreen VR with Oculus or SteamVR, check out the instructions below.

How to Setup Bigscreen VR on PC VR

Learn how to install and setup Bigscreen VR to stream movies, television, and IPTV or play computer games remotely in your VR headset. This guide is for PC VR headsets like the Valve Index, HTC Vive, and Oculus Rift S. 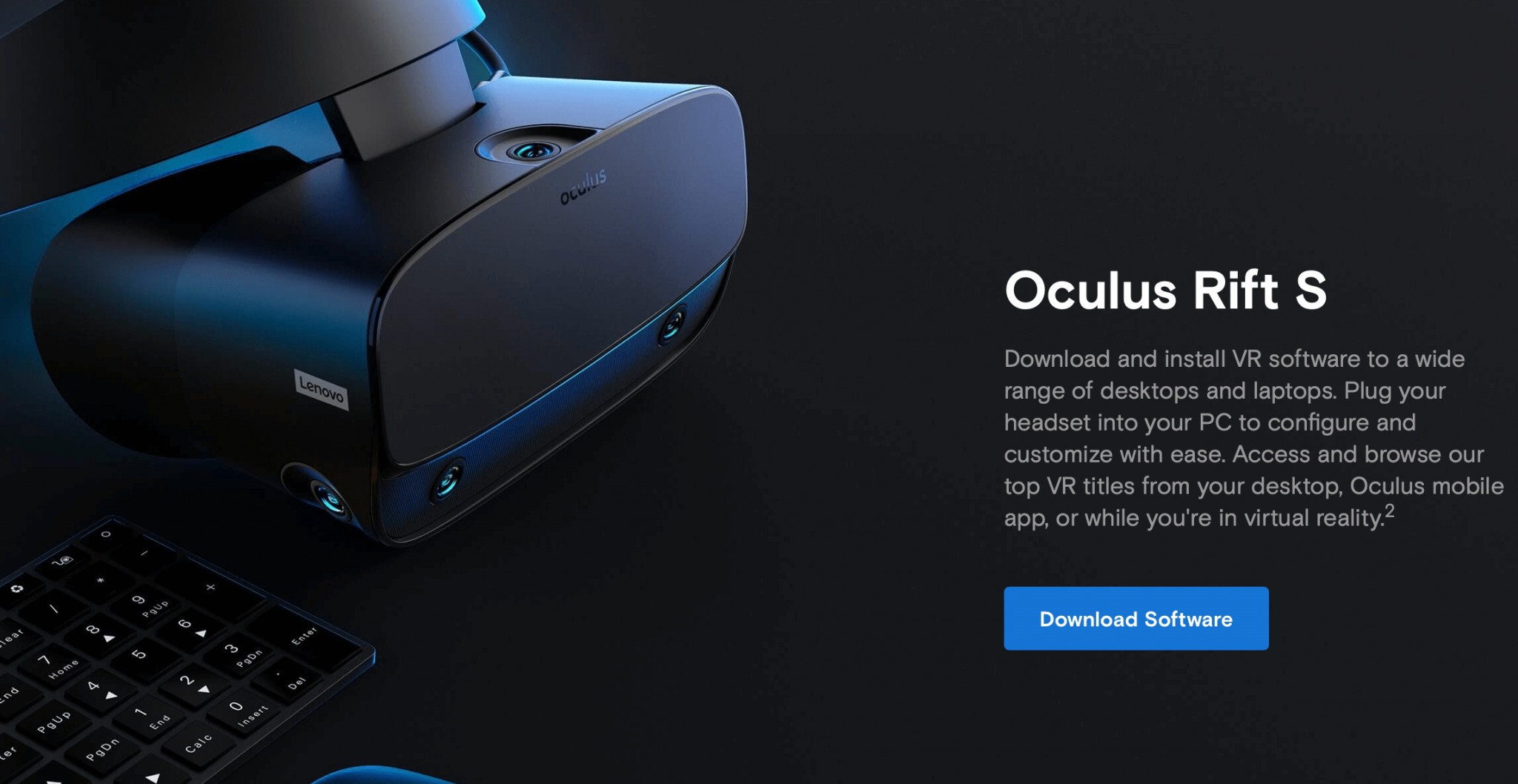 If you don’t have it yet, download either the Steam or the Oculus store to your PC and install it.

Open up Steam/Oculus and use the search bar to search for Bigscreen VR. Download and install Bigscreen to your library.

In Steam, right click on Bigscreen VR. Your two most common options will be to launch in “VR Mode” or to “Play Remote Desktop Streaming Client”.

In VR Mode, you join Bigscreen’s servers, where you can stream movies and TV shows that are located on the platform. If you want this option, choose it and you can skip the rest of this tutorial!

The remote desktop streaming client let’s you stream your PC screen to your headset so that you can play PC games in virtual reality mode.

In Oculus, click the three dots beside Bigscreen. You’ll see options to “Start in VR” or “Start in Desktop Mode”.

Once again, if you start the app in VR mode then you can skip the rest of this tutorial. 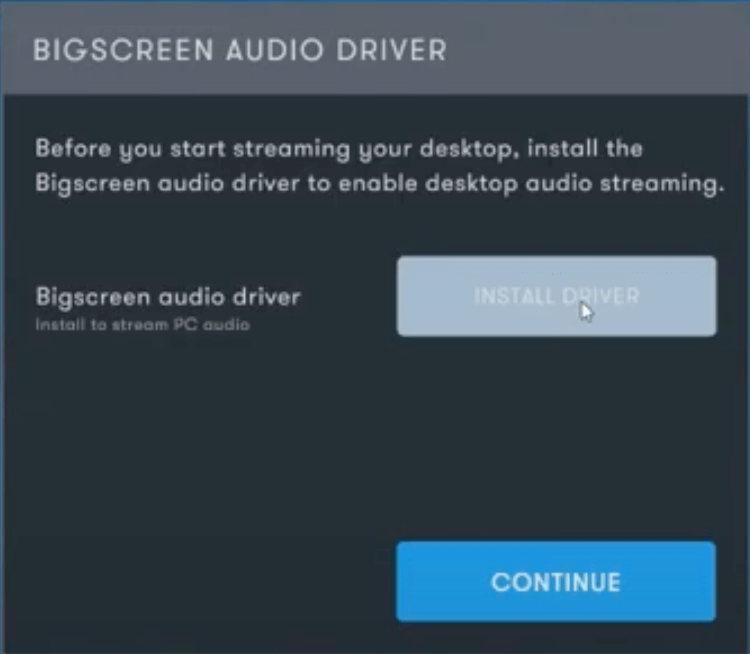 If prompted, click to install the Bigscreen VR Audio Driver. 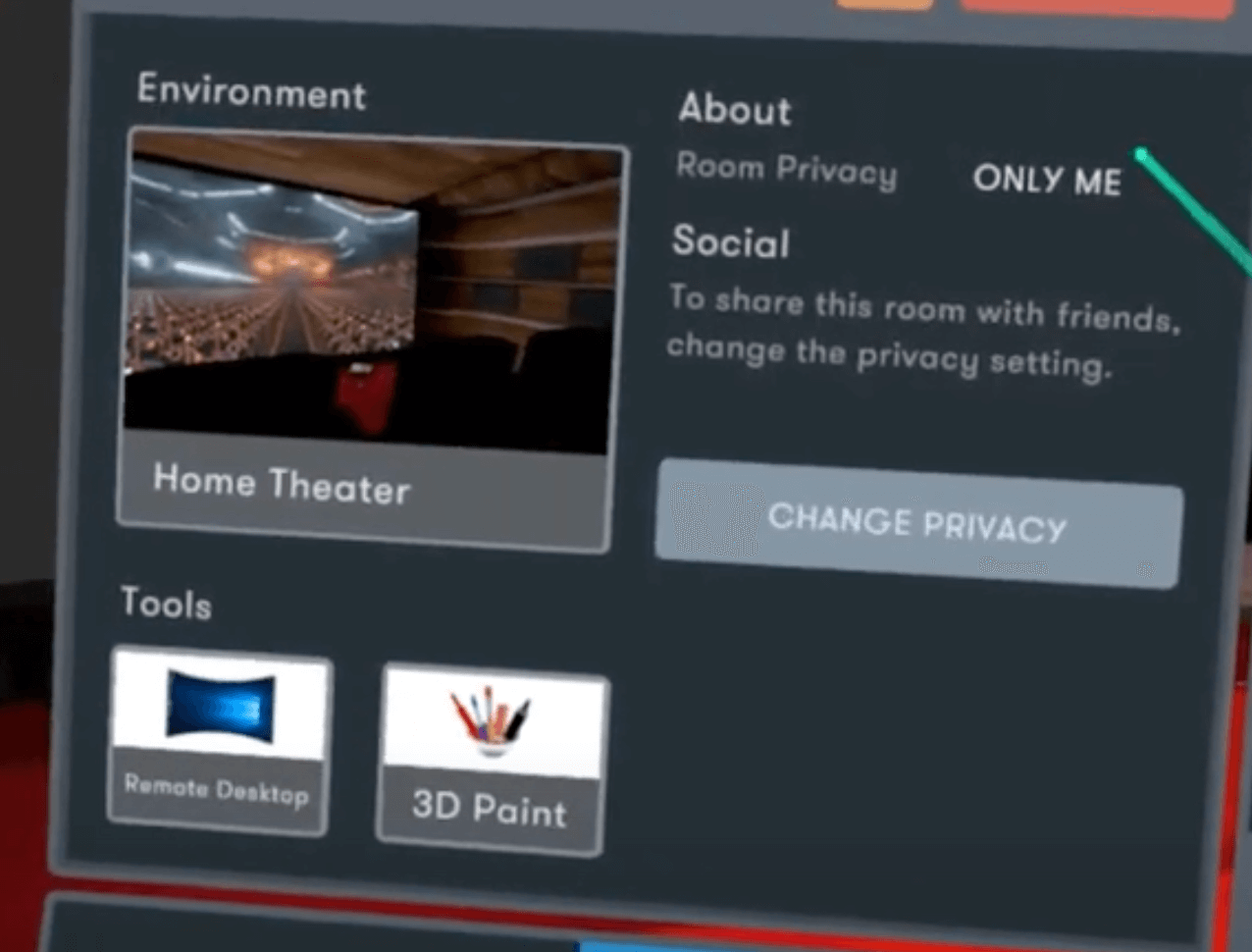 Now, launch the Bigscreen app in your VR headset. If it’s your first time, you’ll be asked to choose your environment and go through a bit of guided setup. Once you are in your room, select Remote Desktop underneath the Tools heading. Then click on Start.

Sync your VR Headset to Your PC 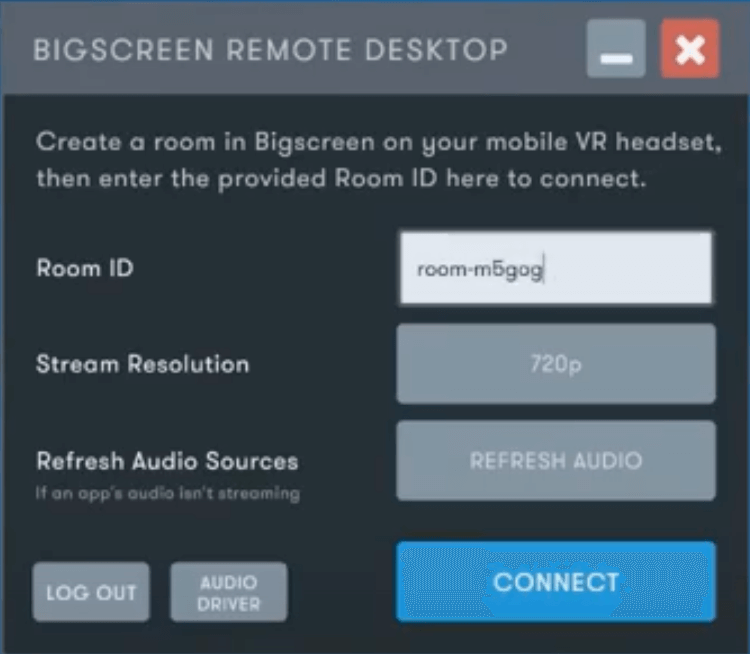 Note your room ID and go back to Bigscreen on your PC and enter in this room ID. Select your stream quality and refresh your audio source before selecting Connect.

If you put back on your headset, your PC screen will now be streaming in your headset! You’ve completed the basic setup process for Bigscreen.

How to Setup Bigscreen VR on the Oculus Quest

Setting up Bigscreen VR on your Oculus Quest 2 or 1 is even easier. Simply search for Bigscreen in the Oculus app on your phone. When you find it, install it on your headset. You will be able to launch Bigscreen from your apps page alongside your other top Quest games.

if you want to try out some cool things in the app, here are some of our favorite things to do in Bigscreen.

In partnership with PlutoTV, Bigscreen VR now contains free-to-watch, ad-supported movies to watch. You can watch these movies on demand in any of the environments within the app. The free movies on Bigscreen VR so far include:

These free-to-watch movies are available in the United States so far. Licensing for the UK, Canada, and other regions is being worked on.

New in December 2020, Bigscreen has added a drive-in movie theater feature. This lets you watch movies from an outdoor theater environment. Bigscreen has other new environments planned for the app as well. It also has a new user interface to check out.

From within Bigscreen, you can watch over 172 specialized TV channels. These include various shows like:

There is also a new To Infinity and Beyond category where you can watch live space shuttle events in VR.

You can invite your friends into your show lobby and watch episodes alongside them within the app.

You can invite your friends into your Bigscreen room while you are playing or watching something. You can chat with your friends live in real time as you play inside of Bigscreen. This means that you can watch movies together at the same time or play games together virtually.

To join your friend’s Bigscreen room:

The app now supports 15 friends in a room at a time!

Watch Movies, Television, and Sports with people around the world

The Bigscreen VR team works hard behind the scenes to host on-demand and live events for Bigscreen users around the world. Use your Bigscreen interface in your VR headset to launch movies and TV shows on demand.

Check out Bigscreen’s events page to find out when there are one-time live movies screenings happening. You can join these live events and watch with virtual friends around the world.

Recently, Bigscreen partnered with Paramount Pictures to bring over 30 movie titles on-demand into the app.

In November 2020, Big Screen added a new green screen environment to the app, useful for VR streamers and presenters. You can record yourself in front of a green screen background and then edit in your location using PC software later. This is useful for VR live streams and Youtubers. You can see a demo of this feature below.

Bigscreen has announced that it will include full remote desktop capabilities, similar to the Virtual Desktop app. This is awesome news because it will give users a VD alternative, which is the number one way to play PCVR games from SteamVR.

The feature will have ultra low latency (10-15ms) when streaming to Quest, according to Bigscreen.

Are you having trouble using Bigscreen VR to do anything? Want to know how to work one of the features in the app? Comment down below and we will help you out!