Ryan William | Updated on April 16, 2022April 16, 2022
We’re reader-supported. When you buy through links on our site, we may earn an affiliate commission.

Relatively unknown virtual reality developer Pico announced the Neo 3 Link this week – a commercial version of their Neo 3 headset that is launching for customers in Europe. In this guide, we compare all of the similarities and differences between the Pico Neo 3 Link vs Meta Quest 2.

Down below, we want you to comment and tell us what you think about the Neo 3 Link as a VR headset and Pico Neo 3 Link vs Meta Quest 2 similarities and differences.

What is the Pico Neo 3 Link?

The Pico Neo 3 is an all-in-one VR headset. Fans were originally really excited about it as an Oculus Quest 2 alternative, but Pico’s original release was focused on the asian market and commercials sales only.

The Neo 3 Link is a rerelease of the original Neo 3 but for consumer markets. It is focusing on the European market where the Meta Quest 2 is hard to find, such as in Germany.

If you are familiar with the Quest 2, then you know what the Neo 3 Link is. It’s an all-in-one headset that has its own Android-based app store. It can also connect to a gaming PC and play PC VR games too.

What is the Meta Quest 2?

The Oculus/Meta Quest 2 is the highest selling VR headset of all time. It is an all-in-one headset that features its own Android-based app store on it. You can play hundreds of games completely wirelessly without any tethered connection.

You can also connect to a gaming PC wirelessly via Air Link or wired via Oculus Link and play PC VR games.

Before we get into the differences, let’s compare all the similarities between the Pico Neo 3 Link vs Meta Quest 2.

As you can see in the specs chart below, a lot of the technical specifications for these two headsets are the exact same:

As you can see, there are a lot of similarities between the Pico Neo 3 Link vs Meta Quest 2.

Next, let’s take a look at the differences.

As you can see above, the Meta Quest 2 supports five different refresh rates from 60 Hz up to 120 Hz. Fast-paced sports games can take advantage of 120 Hz in order to give the games an extra zip. 60 Hz is acceptable for VR videos and media.

The Neo 3 Link only supports 90 Hz which is good at face value, but not quite the same.

The bigger thing that people aren’t talking about is how the limited refresh rate will effect developer compatibility. In order for the Pico to be successful it will need a wide selection of games to choose from. Will games not currently at 90 Hz go through the effort to support the Neo 3 Link?

As you can see above, the Quest 2 comes in two different storage options: a cheaper 128 GB model and a more expensive 256 GB one. By contrast, the Neo 3 Link only has a single storage option available, the 256 GB version. The price for both models is the exact same.

In my opinion, you can never go wrong by going with the bigger storage model. A lot of the new VR games being released are getting up there in size and can be 20 GB per game or more.

Plus, there is the SideQuest VR store that has hundreds of VR games that are not found on the official store. If these games make their way onto the Pico platform, there is even more selection to fill up your headset with.

Verdict: Not a big deal.

In my opinion, this is the biggest difference between the Pico Neo 3 Link vs Meta Quest 2. The Quest 2 stores everything in its front face shell, including the big heavy battery that powers the whole thing.

By contrast, the Neo 3 Link has its battery built right into the rear of the headset. This gives it a nice balance by using the battery to counteract the weight from the display and hardware in the front.

Where we ALWAYS recommend an elite strap for the Quest 2, the weight balance on the Neo 3 Link is going to fit pretty nicely right out of the box.

Speaking of the head strap…

For the included price listed above, the Quest 2 comes with a soft strap. The whole thing works, but it doesn’t provide the greatest feel during long play periods.

You can upgrade the strap on the Quest 2 to the elite strap accessory for €49 below. 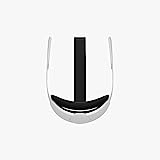 The Neo 3 Link comes with its version of the elite strap right out of the box. Like the Quest 2, this elite strap is a halo-style strap that fits nicely around your head. Combined with the battery in the back of the headset, it provides really nice fit and feel.

Both the Neo 3 Link vs Quest 2 have very similar controllers with the same button scheme. Infrared LEDs are stored in the tracking ring which are used for tracking purposes.

Where the Quest 2 shines is its support for hand tracking. Hand tracking allows you to play some select games with just yours hands by putting your controllers down. This is a unique experience that the Quest 2 has and is improving every month.

You can check out some of the best hand tracking games for the Quest here.

Pico Neo 3 Link vs Meta Quest 2, both headsets support PC VR gaming via a tethered connection back to a gaming PC. Once connected, you can play any Steam VR game you purchase.

Both headsets support wireless PC VR gameplay, which is awesome. You can connect to your home Wi-Fi, which will compress your gameplay and make things run smoothly for you.

If you want a higher bandwidth experience, then you should use a wired connection between headset and PC.

And that’s where the Neo 3 Link shines.

The Pico Neo 3 Link supports wired VR with a DisplayPort game that comes right in the box. DisplayPort does not compress the video stream and there is no extra latency. This means that you will have the best possible experience playing wired VR.

The Quest 2 uses a USB 3.0 connect to a PC, which has less bandwidth than DisplayPort. The Quest 2 will automatically compress the video stream as it sends it to your PC.

For this reason, the Neo 3 Link is a better choice is PC VR gaming is high priority for you.

It is awesome that a true Oculus Quest competitor is hitting the market. For those that don’t want to be tied into Meta’s infrastructure, the Neo 3 Link is the best alternative currently.

However, Pico is a small company who has to be strategic with their roll out. And to start, they are only releasing the Neo 3 Link in the European market. Specifically, they are targeting areas where the Quest 2 is not fully available yet – Germany.

This means that it might be hard to get your hands on the Pico to start. By contrast, the Quest 2 is available in every big box retailer around the world.

It is awesome to see a true all in one VR headset hit the market that is not from Meta. At face value, a lot of the specs between the two headsets are the exact same. When you peel back the layers though, the Pico provides a better value for the same price in two areas:

For these reasons, it is impressive that Pico can offer their headset for the exact same price as the Quest 2.

The biggest unknown for us is whether all of our favorite VR games from the Quest 2 will be available on the Pico Neo 3 Link. Hopefully the limited release of the headset doesn’t hurt the platform.

Are you interested in buying the Neo 3 Link? Comment down below and let us know what you think!

The Neo 3 Link is available to preorder starting on April 15th and is released on May 24th.