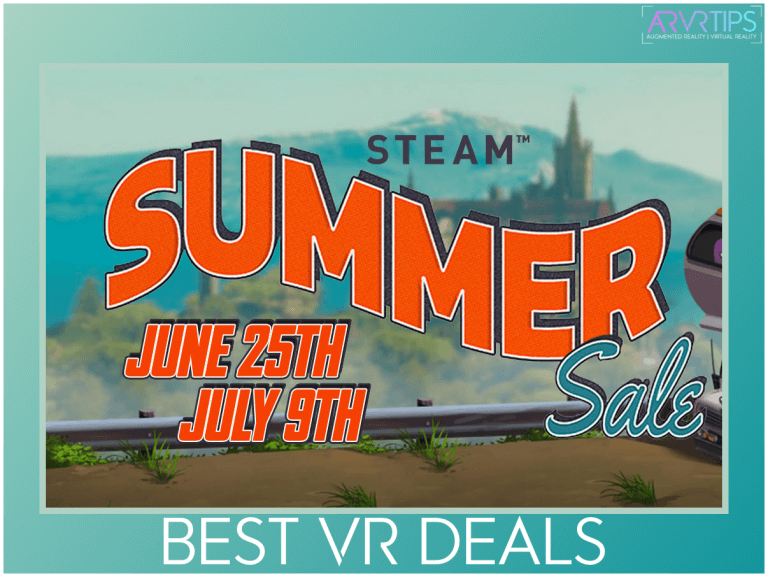 The 2020 Steam Summer Sale is now live and we have details on all of the best VR deals in this guide! Come learn about deep discounts on Half-Life: Alyx, Skyrim VR, Fallout 4 VR and other virtual reality sales!

Each summer, Steam holds a sale on a large selection of top-tier games. With the rise of virtual reality headsets and hardware, Steam has upped their game with some good VR deals too.

There are deals on Half-Life: Alyx to Skyrim VR, No Man’s Sky, Fallout 4 VR, and hundreds more.

To celebrate the summer sale, we are giving away free games from the Summer Sale! To enter, either:

We will give away a free Steam game for every 100 entries we receive!

What is the Steam Summer Sale?

The Steam Summer Sale is an annual sale that Steam offers during the hottest months of the year. During this time, you can save big money on some of the hottest PC and VR titles. There will be sales on thousands of games on the Steam store.

During the summer sale, you will get an additional $5 USD off your purchase of $30 or more. This is called the road trip special!

The Best VR Deals in the Steam Summer Sale 2020

Below is a list of some of our favorite virtual reality deals in the Steam Summer Sale. In total, there are hundreds of deals to check out. Check out the Steam summer sale here to see the complete list.

The number one virtual reality game is on sale for the first time during the 2020 Steam Summer Sale. Instead of $60, Alyx is 25% off during the sale.

The popular space exploration game has a rocky start, but No Man’s Sky has made numerous improvements to the game. During the summer sale, it is 50% off!

We might need a fact check, but we believe this is the first time that Saints & Sinners has been on sale in the SteamVR store. During the summer sale, you can save 20% on this awesome Walking Dead zombie survival game.

Pavlov is receiving some renewed interest thanks to a beta release on the Oculus Quest. The SteamVR full version of the game is 40% off during the summer sale.

One of the most immersive open world games of all time, Skyrim VR is a whopping 70% off during the summer sale.

Fallout is a popular post-apocalyptic open world game series. Fallout 4 VR is 70% off during the summer sale, which is a huge deal for the game.

The Valve Complete Pack is a game bundle that contains every retro Valve game (Alyx not included). There are 25 items included in this bundle, including every Counter-Strike game, Day of Defeat, Half-Life, Portal, Left 4 Dead, Dota 2, and The Lab. This bundle is 87% off, saving you over $100 dollars.

The Oculus Quest version of this game launches on July 16th, but you can get the original PCVR game for 33% off its regular price.

This game bundle was put together by VR developers to give you 63% off a collection of some of the most popular VR games ever. Included in this bundle is Thumper, Budget Cuts, Space Pirate Trainer, Job Simulator, Sairento VR, GORN, SUPERHOT VR, SWORDS of GARGANTUA, and Arizona Sunshine.

This is another first person shooting game with renewed popularity thanks to a release for the Oculus Quest. The PCVR version is on sale during the summer sale for 50% off.

If you want to get fit while you wear your VR headset, this fitness bundle includes 3 games for 20% off during the sale. Included in this bundle is Synth Riders, BOXVR, and Until You Fall.

Click here to see all of the VR games on sale during Steam’s summer sale.

Again, we are giving away a free Steam VR game of your choice for every 100 entries to our content! To enter,

If you complete both, you get two entries!

What did you buy during the summer sale? Comment down below and help out other VR players who can’t decide!